Employee: "When their appointment is created, it can be 14 days out, but we're making them wait 6-20 weeks to create that appointment. That is unethical and a disservice to our Veterans.”

Speaker of the House John Boehner, D-Ohio, is joined by veterans as he speaks during a press conference on legislation that would bring greater accountability to the Department of Veterans' Affairs, on Capitol Hill in Washington, D.C. April 3, 2014. UPI/Kevin Dietsch | License Photo

Dr. Same Foote, a veteran doctor just retired after 24 years with the VA system in Phoenix, blew the whistle on PVAHS maintaining two separate records of waiting lists—one fake list to convince Washington they were providing timely appointments (14-30 days is the expected turnaround standard for timely care required by the VA) and another real but secret list where veterans' wait for an appointment could last over a year.

"The scheme was deliberately put in place to avoid the VA's own internal rules," said Foote.

Staff were instructed not to actually save appointments in the computer system but rather to enter the veteran seeking an appointment’s information and then print out a hard copy from a screen capture.

"So the only record that you have ever been there requesting care was on that secret list," Foote revealed. "And they wouldn't take you off that secret list until you had an appointment time that was less than 14 days so it would give the appearance that they were improving greatly the waiting times, when in fact they were not."

PVAHS workers even raised concerns via email about the secret list and the administrations praise of its use in an attempt to sound the alarm bells, "I have to say, I think it's unfair to call any of this a success when Veterans are waiting 6 weeks on an electronic waiting list before they're called to schedule their first [primary care physician] appointment," an email reads. "Sure, when their appointment is created, it can be 14 days out, but we're making them wait 6-20 weeks to create that appointment."

"That is unethical and a disservice to our Veterans,” the email adds.

"I feel very sorry for the people who work at the Phoenix VA," said Foote. "They're all frustrated. They're all upset. They all wish they could leave 'cause they know what they're doing is wrong. But they have families, they have mortgages and if they speak out or say anything to anybody about it, they will be fired and they know that."

CNN’s article includes personal accounts of veterans waiting months for an appointment, their loved ones watching them die in pain without care.

Foote says he knows as many as 40 veterans who’ve shared the same fate.

Fox News has just exposed Sharon Helman, the director of PVAHS, as having been previously involved in another records falsification scandal while director of the Veterans Affairs facility in Spokane, Washington where the VA’s Office of Medical Investigations found the number of veteran suicides was being intentionally misrepresented, after which she transferred to Phoenix.

"This is not the first time that Sharon Helman has been involved in an incident involving manipulation of patient data," said the CEO of Concerned Veterans for America, Pete Hegseth. "She fudged the number of veterans suicides at a previous job — and was never fired. She just moved."

At least 40 veterans died neglected by the system meant to serve them.

Foote estimates the number of veterans still on a secret list waiting for an appointment at somewhere between 1,400 and 1,600.

U.S. News // 1 hour ago
Coronavirus could prevent China from meeting $80B agriculture trade pledge
EVANSVILLE, Ind., Feb. 26 (UPI) -- With the phase one trade deal with China in effect just under two weeks, agricultural experts fear the coronavirus will impede China's ability to buy a promised $80 billion in farm goods over the next two years. 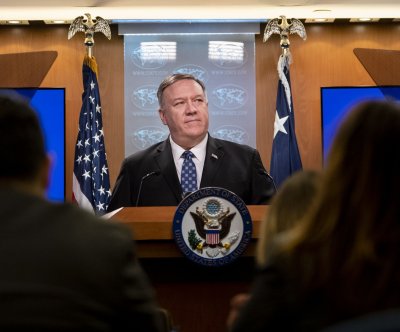