U.S. President Barack Obama speaks before signing a presidential memorandum increasing overtime protections for workers during an event in the East Room of the White House in Washington, DC on March 13, 2014. The memorandum instructs the Labor Secretary Tom Perez to update overtime regulations that will include increasing the number of workers eligible. UPI/T.J. Kirkpatrick/Pool | License Photo

"Our businesses have created more than 8.5 million new jobs over the last four years. The unemployment rate is at the lowest it's been in over five years," Obama said before signing the memorandum. "But, in many ways, the trends that have really battered middle-class families for decades have gotten worse, not better. ... So we've got to reverse those trends. We've got to build an economy that works for everybody, not just for a few."

A few weeks ago Obama signed an executive order requiring federal contractors pay employees a minimum wage of at least $10.10 an hour.

"Today I'm going to use my pen to give more Americans the chance to earn the overtime pay that they deserve," Obama said. "Now, overtime is a pretty simple idea. If you have to work more, you should get paid more."

Overtime rules that establish the 40-hour workweek have been eroded since they were enacted about 75 years ago, the White House said, resulting in millions of salaried workers who don't have the protections of overtime for reasons such as earning slightly more than the ceiling for overtime.

He said he has directed Labor Secretary Tom Perez "to restore the common sense principle behind overtime. If you go above and beyond to help your employer and your economy succeed, then you should share a little bit in that success."

"And this is going to make a real difference in the lives of millions of Americans, from managers in fast-food and retail, to office workers, cargo inspectors," Obama said.

RELATED CBO says $10.10 minimum wage would help many, hurt some

Sixteen people, including business owners who support the directive, advocates for working families and individuals who make overtime, surrounded Obama as he announced then signed his executive order.

The memorandum instructs the labor secretary to update regulations regarding who qualifies for overtime protection and consider how the regulations could be revised to:

-- Update existing protections in keeping with the intention of the Fair Labor Standards Act.

-- Address the changing nature of the American workplace.

-- Simplify the overtime rules to make them easier for both workers and businesses to understand and apply.

The National Employment Law Project, in a statement, praised Obama's directive to the Labor Department to review and update its rules.

"Expanding overtime pay will help ensure that workers receive the pay they deserve for the long hours they work," NELP said. "Combined with his recent executive order raising minimum wages for employees of federal contractors and his support for a higher minimum wage for all workers, the president's initiative on overtime reflects further progress in addressing the related crises of stagnant wages, declining incomes and expanding inequality."

Even before Obama's remarks, business groups blasted the regulations, the Hill said.

"This came as a shot out of the blue," said David French, the National Retail Federation's senior vice president for government relations. "Just on the surface, this looks like an enormous new administrative burden."

"Changing the rules for overtime eligibility will, just like increasing the minimum wage, make employees more expensive and will force employers to look for ways to cover these increased costs," said Marc Freedman, executive director of labor law policy at the U.S. Chamber of Commerce. 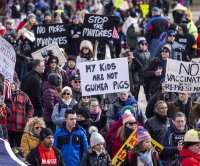 U.S. News // 19 hours ago
Michael Avenatti seeks COVID-19 related delay for alleged Stormy Daniels theft trial
Jan. 23 (UPI) -- Michael Avenatti, the disgraced attorney who represented Stormy Daniels in her 2018 lawsuit against Donald Trump, has sought a two-week delay to the trial over whether he cheated her out of her $300,000 book advance.