House to investigate if CIA removed material from Senate computers 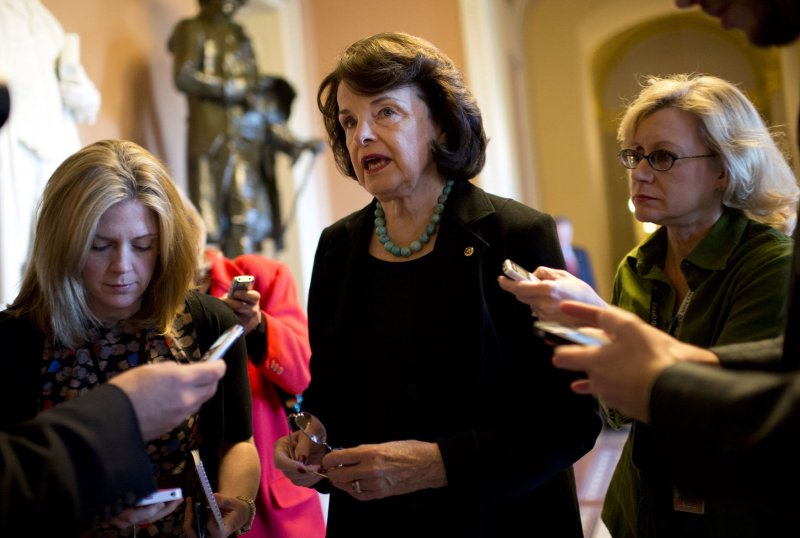 Sen. Dianne Feinstein (D-CA) speaks to the media after a caucus meeting on Capitol Hill in Washington on November 14, 2012. UPI/Kevin Dietsch | License Photo

WASHINGTON, March 12 (UPI) -- The head of the U.S. House intelligence committee said Congress must determine if the CIA removed material from the Senate committee's computers.

Rep. Mike Rogers, R-Mich., told CNN that there is "going to be a penalty" if the CIA broke the law. He said his Senate counterpart, Diane Feinstein, D-Calif., would not have made the charge unless she believed it was true.

Feinstein said Tuesday she believes documents were removed from Senate staff computers during an investigation last year. She said the CIA searched the computers to determine if Senate staff had documents they had not been authorized to examine.

"It's troubling to see this, but I do have immense respect for Sen. Feinstein," Rogers said. "If she's going down to the floor, she clearly believes that something untoward happened."

CIA Director John Rogers, speaking to the Council on Foreign Relations, said the Justice Department will investigate Feinstein's charges. But he said "nothing could be further from the truth."

U.S. News // 1 hour ago
Bodies of mother, 3 children recovered from Minnesota lake
July 2 (UPI) -- Minnesota police are investigating a possible triple-homicide after the bodies of a woman and her three children were recovered from a lake in Ramsay County.

U.S. News // 3 hours ago
I-95 corridor bracing for turbulent storms Saturday evening
As the holiday weekend kicks off, AccuWeather meteorologists are warning mid-Atlantic and New England residents of an elevated severe weather risk into Saturday evening.

U.S. News // 6 hours ago
Third police officer dies in Kentucky shootout
July 2 (UPI) -- Authorities in Kentucky said a third officer shot in a standoff this week has died after police attempted to serve a warrant.