SEATTLE, March 10 (UPI) -- Today Gallup released the results of a survey conducted as part of the Gallup-Healthways Well-Being Index, along with a report on the data, which shows the U.S. uninsured rate is at its lowest since 2008.

2013 saw the uninsured rate hit an all-time high of 18 percent in its third quarter, but that percentage has been steadily falling since, down to 16.2 percent in January and 15.6 percent in February.

Based on a telephone survey of 28,396 adults, Gallup found the uninsured rate declined most among lower-income and black Americans. Uninsured members of households making less than $36,000 annually dropped 2.8 points to 27.9 percent since the fourth quarter of 2013, while the percentage of uninsured blacks dropped 2.6 points to 18.3 percent. Hispanics have the highest rate of uninsured at 37.9 percent.

Gallup found that the uninsured rate dropped for every demographic except Americans over 65, which can likely be accounted for by their prior enrollment in Medicare.

While the Obama administration has made the enrollment of young adults a priority “as healthcare experts say 40 percent of new enrollees must be young and healthy for the Affordable Care Act to be successful,” the report “highlighted no significant changes in young adults’ enrollment” since December.

The report also found fewer Americans are getting primary coverage through their employer, instead covered by plans paid for fully by themselves or a family member.

Gallup regards the decline in uninsured rates as a likely result of the Affordable Care Act and predicts a further drop in uninsured as the end of open enrollment for Obamacare comes on March 31. 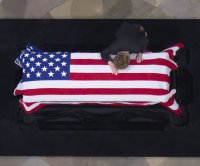 U.S. News // 18 minutes ago
Former Sen. Bob Dole to be honored, lie in state at U.S. Capitol Thursday
Dec. 9 (UPI) -- Bob Dole, former U.S. senator from Kansas and Republican presidential nominee who died early this week, will be memorialized and lie in state in the U.S. Capitol Rotunda on Thursday.

U.S. News // 21 hours ago
Biden visits Kansas City to underscore benefits of $1.2T infrastructure plan
Dec. 8 (UPI) -- President Joe Biden traveled to Kansas City on Wednesday in a trip to promote the new $1.2 trillion bipartisan infrastructure bill and explain how it's going to create thousands of jobs in places like the Midwest.