Bus driver Rickey Wagoner was shot twice in the chest, but the bullets were stopped by a bible he carried in his shirt pocket.

"I've been hit in the leg," Wagoner told a 911 dispatcher early Monday morning. "My chest feels like I've been hit with a sledgehammer."

He had been shot three times: once in the leg, and twice in the chest. But the shots to the chest were stopped by the copy of "The Message," a modern translation of the New Testament, Wagoner was carrying in his pocket.

"There was obviously some kind of intervention involved in this incident, because he probably should not be here," said Sgt. Michael Pauley of the Dayton Police Department.

Wagoner, 49, a bus driver in Dayton, Ohio, was assaulted by three men Monday morning while standing outside his bus.

"His bus had stopped running and he got out to see what the problem was," Pauley said.

Wagoner described his assailants as three young black men, and said he heard one of the suspects tell another to kill him "if you want to be all the way in the club."

Wagoner, whose injuries are not life-threatening, told dispatchers he was attempting to repair a malfunction in his bus when he was approached by the suspects and shot twice in the chest. He attempted to wrestle the gun away from his attacker and a third shot found his leg.

During the struggle, another suspect stabbed Wagoner in the arm with a knife, but the bus driver said he was able to pull a pen from his pocket.

"I stabbed one in the leg with my pen," Wagoner told dispatchers. "He hollered and that's when they all ran."

"It's way too early in the investigation" to determine if the attack was some kind of gang initiation, said Sgt. Richard Blommel.

No arrests have been made, but police are searching for the three young men, possibly in their late teens, who were driving a dark-colored 1990s model Ford. 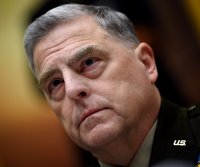 U.S. News // 20 hours ago
Tuskegee Airman Charles McGee dies at age 102
Jan. 17 (UPI) -- Brig. Gen. Charles McGee, a decorated Air Force pilot and one of the last surviving members of the Tuskegee Airmen, the all Black squadron of World War II, has died. He was 102.
Advertisement