SANTAQUIN, Utah, Jan. 31 (UPI) -- A sheriff's deputy was killed and another wounded in a shooting spree that ended when officers shot the gunman, who later died, Utah authorities said.

The deputy killed was identified as Sgt. Cory Wride, 44. Deputy Greg Sherwood, 38, was shot in the head and hospitalized in critical condition.

Police said the suspect, Jose Angel Garcia-Jauregui, 27, described as a man with "a significant criminal history," went on a 50-mile shooting spree through Utah and Juab counties, the Salt Lake Tribune reported.

The violent confrontation with deputies began Thursday when Wride stopped along Route 73 to check on an apparently abandoned vehicle.

After Wride failed to radio back to dispatch at a designated time, officers found him dead in his car, the Tribune reported.

Utah County Sheriff Jim Tracy said police believe Garcia-Jauregui waited in his car for an officer to stop just so he could shoot him.

"It's my personal belief that that was the case. He may very well have parked along the side of the road hoping that some officer might stop behind him. We really don't have any idea what the motive is," Tracy said.

Garcia-Jauregui took off in his vehicle but was chased by sheriffs' deputies in the Santaquin area, the Deseret News reported.

The gunman shot Sherwood and, after crashing a stolen vehicle, confronted Juab County officers who shot him. He was hospitalized in critical condition and later died of his injuries. 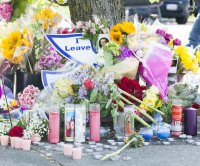