That means plans to open horse-slaughtering facilities are on hold, the Wall Street Journal reported.

Funding for federal inspectors was restored in 2011 after four years when it was withheld. Supporters of allowing horses to be sold for food in the United States argued that it is a humane way of dealing with horses that might otherwise be abandoned.

Horse meat is routinely sold for human consumption in France and some other countries. U.S. plants would probably have shipped most of their supply overseas.

"Most people I talk to don't want to see horses die and won't eat horse meat in this country, because that's our culture. But that's not everybody's culture," A. Blair Dunn, a New Mexico lawyer representing two companies planning to open facilities there, told the Journal. "And we need to respect that people can decide for themselves what they want to eat."

"The message is clear: Our nation's leaders agree that horses deserve protection from slaughter," the American Society for the Prevention of Cruelty to Animals said in a statement. 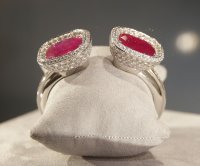