Immigration reform: If not now, when?

For a year that started with strong, if not unprecedented, support for reform, the flagging efforts were met with silence and apathy. Congress is in its final days of the 2013 session and it’s clear immigration reform will be shelved until next year.

US President Barack Obama meets with people taking part in the Fast For Families on the National Mall in support of immigration reform, on November 29, 2013, in Washington, DC. UPI/Leslie E. Kossoff/Pool | License Photo

Vice President Joe Biden smiles as President Barack Obama makes a point on immigration reform in the East Room of the White House in Washington, DC on October 24, 2013. The president called on congress to pass an immigration reform bill by the end of the year that would provide a path to citizenship for 11 million immigrants living in the United States illegally, and also tighten border security. UPI/Pat Benic | License Photo

Rep. Tony Cardenas (D-CA) speaks at a press conference on immigration reform as he is joined by freshmen members of the House of Representatives, on Capitol Hill in Washington, D.C., November 13, 2013. UPI/Kevin Dietsch | License Photo

President Barack Obama greets spectators after speaking about immigration reform in the East Room of the White House in Washington, DC on October 24, 2013. The president called on congress to pass an immigration reform bill by the end of the year that would provide a path to citizenship for 11 million immigrants living in the United States illegally, and also tighten border security. UPI/Pat Benic | License Photo

Rep.Joaquin Castro (D-TX) makes remarks during a news conference on immigration reform, at the US Capitol, October 23, 2013, in Washington, DC. House Democratic leaders called on House Republicans to work toward a comprehensive agreement, saying it would also improve the economy. UPI/Mike Theiler | License Photo

U.S. President Barack Obama pauses as he addresses members of the Business Roundtable on September 18, 2013 at the Business Roundtable Headquarters in Washington, DC. Obama spoke on various topics including the national debt ceiling and immigration reform, and then answered questions from the members after his address. UPI/Alex Wong/Getty/Pool | License Photo

United States President Barack Obama makes a statement to the press prior to meeting with CEOs, business owners, and entrepreneurs in the Roosevelt Room of the White House to discuss the importance of commonsense immigration reform, in Washington, D.C. on Monday, June 24, 2013. From left to right: Steve Case, Chairman and CEO, Revolution, Co-Founder, America Online, Chairman, The Case Foundation; unidentified; unidentified; Cecilia Muñoz, Director of the Domestic Policy Council; President Obama; Valerie Jarrett, Special Advisor to the President; and Gene B. Sperling, Director of the National Economic Council. UPI/Ron Sachs/Pool | License Photo

Members of the pro-immigration reform group Dreamers' Moms hold a prayer vigil prior to the Senate Judiciary Committee mark-up of the Immigration Reform Bill, on Capitol Hill on May 9, 2013 in Washington, D.C. UPI/Kevin Dietsch | License Photo

Thousands of demonstrators gather in Los Angeles on May 1, 2013, as part of May Day national marches and rallies, energized by the possibility of immigration reform. Today's demonstrations are intended to press Congress to enact legislation ending deportations. UPI/Jim Ruymen | License Photo

WASHINGTON, Dec. 9 (UPI) -- Congress is in the final days of its 2013 session with lawmakers facing another round of pressing issues that need resolution by the year’s end. In the U.S. House, the holiday schedule is out -- and it’s clear immigration reform will be shelved until next year.

For a year that started with strong, if not unprecedented, support for reform, the flagging efforts were met with silence and apathy. Striking a new budget deal will be the most critical issue this month, followed by work on a farm bill and wrapping up legislation authorizing military pay. This leaves no time for comprehensive immigration reform.

The reform movement has backing from evangelical Christians, Democrats and many Republicans. There are political arguments, economic arguments and moral arguments. Advocates have protested, marched, prayed and fasted for reform.

Ali Noorani, executive director of the National Immigration Forum and an advocate for immigration for the last decade, said the political climate at this time is unprecedented because “the politics, the policy and the humanity are meeting at precisely the right moment.”

In June, the Senate passed a bi-partisan immigration reform bill. When it moved to the House, the comprehensive measure stalled and now many House members have said they intend to pass reform but in smaller pieces of legislation.

Immigration experts say activists are still pushing for reform because this issue is “personal.”

“Real people’s lives get impacted everyday,” said Jill Wilson, an immigration policy expert at Brookings Institution. “This is a personal issue and this affects their lives.”

Wilson said she and others are looking forward to a resolution on reform.

“I think a lot of people are still holding out hope that they will move this across the finish line,” Wilson said.

Noorani, touching on the deeply personal aspect of this issue, said the issue of immigration will not go away. He said he is reminded of the sensitive issue of this nature often when he speaks with businessmen and law enforcement officials.

“They are breaking down into tears because they know immigrants,” Noorani says. “It touches peoples’ hearts and minds unlike anything else.”

The number of deportations in the U.S. dropped in 2013, according to preliminary numbers from the Department of Homeland Security. Nearly 365,000 people were deported during the fiscal year, compared to an annual average of 400,000 in recent years.

“That move was a signal that the House is taking this seriously,” said Wilson.

At his weekly news conference on Nov. 21, Boehner said he’s hopeful progress will be made next year. He said private conversations are under way among lawmakers to figure out the best strategy in moving forward.

“The 113th Congress is conducive to passing reform,” Noorani said. “We have another year to get this through the House.”

RELATED Immigration reform to play second-fiddle to budget this winter

For now he is focusing on the end goal: “Imagine when we win and the kind of celebration that is going to take place.”

U.S. News // 4 hours ago
McDonald's to launch first U.S. rewards program this summer
June 22 (UPI) -- McDonald's announced Tuesday that it will unveil the first U.S. loyalty program in its history this summer. 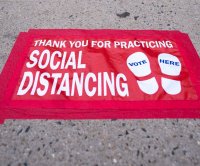