"By taking this action, the United States will help raise the profile of the issue and inspire other nations," Deputy Assistant Secretary of State Judy Garber said at the Rocky Mountain Arsenal National Wildlife Refuge, 8 miles northeast of downtown Denver.

"All of us have to step up our game and work together to put an end to this before we lose the species forever," she said in remarks quoted by The Denver Post.

Secretary of State John Kerry offered a $1 million reward Thursday for information that could help end the Xaysavang Network that "facilitates the killing of endangered elephants, rhinos and other species for products such as ivory."

The Laos-based criminal syndicate has affiliates in South Africa, Mozambique, Thailand, Malaysia, Vietnam and China, the State Department said in a statement.

At least 25,000 elephants were illegally killed in 2012, and even more this year, said the U.N.-backed Convention on International Trade in Endangered Species, also known as the Washington Convention.

The latest slaughter figure is the highest since CITES banned ivory commerce in 1989.

U.S. Assistant Interior Secretary Dan Ashe compared the intensifying elephant killings to the great slaughter of American bison in the late 19th century that brought the number of bison remaining alive in North America to as low as 541.

"We have a moral obligation to respond," he told U.S. officials and wildlife conservation leaders at the arsenal to witness the crush in a giant blue rock-grinder near a warehouse. "You have the chance to crush wildlife trafficking and save these magnificent creatures."

The United States bans the import and export of African ivory. But it does not ban the sales of ivory that arrived into the country before 1989.

The U.S. Fish and Wildlife Service will donate the pulverized ivory to a still-to-be-determined museum for a monument to slaughtered elephants, officials said.

Officials rejected the idea the crush would fuel demand for illegal ivory.

"This ivory would never be made available to the market," the Fish and Wildlife Service said in a statement. "Its destruction has no impact on the overall supply and does not create any incentive for poaching.

"By demonstrating our commitment to combat poaching and illegal trade, and to arrest and prosecute people who engage in these activities, we are providing a strong disincentive to poachers and wildlife traffickers," it said. 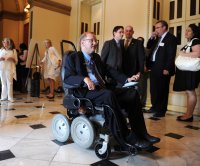