MOON, Pa., Nov. 8 (UPI) -- A Moon, Pa., man has been arrested and charged with causing an explosion that destroyed his home and damaged nine other homes nearby, police said.

Shawn Landa, 47, has been charged with several counts of arson, criminal mischief and causing or risking catastrophe for the Oct. 12 explosion, the Pittsburgh Post-Gazette reported.

A criminal complaint against Landa said the explosion was a suicide attempt.

It said Landa was "depressed and down on himself" when he broke a gas line that fed gas logs in his basement, and then turned the gas on before falling asleep in a chair upstairs.

"He said that he fell asleep and woke three to four hours later," the complaint says. "At this time, he grabbed a cigarette and lighter. When he struck the lighter, the house blew up."

Investigators said Landa told them he was influenced by a movie about the Hindenburg.

"This gave him the idea to blow up the house," the complaint says.

U.S. News // 22 hours ago
Andrew Yang concedes as NYC mayoral race likely to be decided by ranking system
June 22 (UPI) -- Voters in New York City will participate in primary elections on Tuesday to determine which two candidates will face off to replace outgoing Mayor Bill de Blasio this fall. 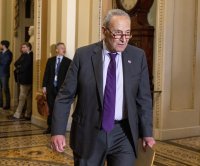 U.S. News // 11 hours ago
Tennessee man pleads guilty in Jan. 6 Capitol attack
June 22 (UPI) -- A Tennessee man pleaded guilty Tuesday to demonstrating inside the U.S. Capitol during the Jan. 6 attack on the building.

U.S. News // 12 hours ago
Senate holds rare hearing on D.C. statehood
June 22 (UPI) -- The Senate held a rare hearing to evaluate statehood for Washington, D.C., with supporters pushing for voting rights and opponents questioning the legality of creating a new state without a constitutional amendment.
Advertisement