Boehner: Obama said 'he will not negotiate' 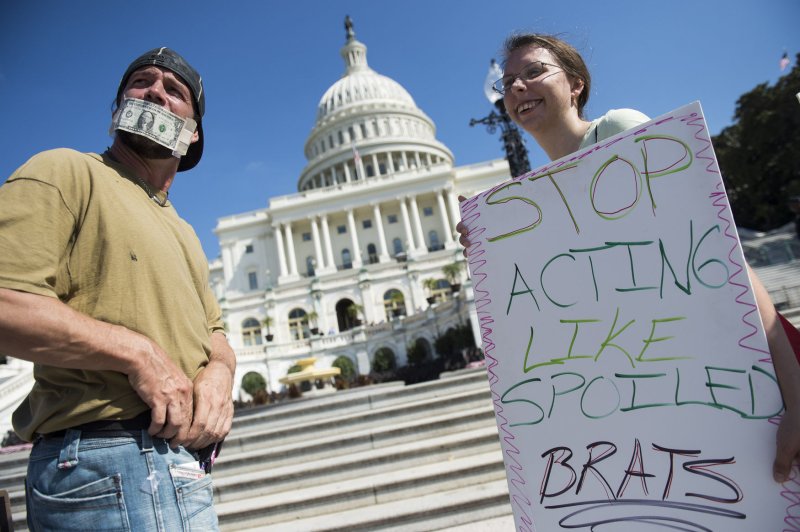 John Zangas and Janette Dunder Terry protest in front of the U.S. Capitol during the second day of the government shutdown on October 2, 2013 in Washington, DC. National Parks and Memorials and sections of the federal government remain closed as congress fights to pass a budget bill. UPI/Kevin Dietsch | License Photo

Boehner -- who accuses Democrats of being unwilling to negotiate key elements of the Affordable Care Act in return for Republican agreement on a spending bill -- said after the meeting, "The president reiterated one more time tonight that he will not negotiate."

Reid said after the meeting he once against urged Boehner to accept Democrats' counter-offer for negotiations once Congress passes a short-term funding bill that does not include a delay in implementing the ACA, commonly called Obamacare.

"What the speaker has to accept is 'yes' for an answer," Reid said.

"We're through playing these little games focused on Obamacare," he said.

Earlier, Boehner rejected a proposal by Reid to work on tax reform once Congress approves a funding bill.

RELATED Many congressional members forgo or donate salaries during shutdown

Reid made the offer Wednesday in a letter to Boehner, The Hill reported.

"I commit to name conferees to a budget conference, as soon as the government reopens," he wrote. "This conference would be an appropriate place to have those discussions, where participants could raise whatever proposals -- such as tax reform, healthcare, agriculture, and certainly discretionary spending like veterans, National Parks and NIH -- they felt appropriate."

A spokesman for Boehner rejected the proposal.

"The entire government is shut down right now because Washington Democrats refuse to even talk about fairness for all Americans under Obamacare," spokesman Michael Steel said in a statement to the liberal website Talking Points Memo. "Offering to negotiate only after Democrats get everything they want is not much of an offer."

Reid's letter suggested Democrats might be willing to discuss changes in the Affordable Care Act, The Hill said.

In an interview with CNBC a few hours before his meeting with congressional leaders, Obama said he was "exasperated" by congressional Republicans' failure to agree to a bill funding the federal government.

"During the course of my presidency I have bent over backwards to work with the Republican Party and have purposely kept my rhetoric down," he told CNBC. "I think I'm pretty well known for being a calm guy. ... Sometimes people think I'm too calm. But am I exasperated? Absolutely I'm exasperated. Because this is entirely unnecessary."

Obama noted there have been shutdowns in the past but he said the current political reality is "different."

Obama Tuesday accused far-right Republicans of strangling their party and the economy.

The shutdown came about when House Republicans rejected any budget that did not scale back the Patient Protection and Affordable Care Act and Senate Democrats insisted on a so-called clean continuing resolution to fund government activities.

Earlier Wednesday, Obama scaled back his planned trip to Asia next week as a result of the funding dispute.

The White House said the president still plans to travel to Indonesia and Brunei, where he is to attend two international summits, but those plans have yet to be reviewed.

Secretary of State John F. Kerry will visit the Philippines and Malaysia instead of the president.

"Due to the government shutdown, President Obama's travel to Malaysia and the Philippines has been postponed," Caitlin Hayden, a spokeswoman for the National Security Council, told The Washington Post in an email. "Logistically, it was not possible to go ahead with these trips in the face of a government shutdown. Because they are on the back end of the President's upcoming trip, our personnel was not yet in place and we were not able to go forward with planning. ... Secretary Kerry will lead delegations to both countries in place of the president."

Hayden said Obama looks forward to visiting Malaysia and the Philippines later in his term.

Hayden placed blame for the shutdown squarely at the feet of House Republicans.

"The cancellation of this trip is another consequence of the House Republicans forcing a shutdown of the government," she said in the email to the Post. "A faction of House Republicans [is] doing whatever they can to deny America from carrying out our exceptional role in the world."

Republicans and Democrats traded blame throughout the day Tuesday.

As prospects for a drawn-out shutdown increased, there was the growing possibility the standoff could become intertwined with an even larger battle over raising the debt limit in mid-October.

Treasury Secretary Jack Lew has said he will begin running short of cash to pay the government's bills unless Congress raises the federal debt ceiling by Oct. 17.

"The sad news is that, given the performance to date, that the debt-limit extension is coming up in two weeks, and this does not portend responsible action on the debt limit," House Democratic Whip Steny Hoyer, D-Md., told The Wall Street Journal.

Sen. Richard Shelby, R-Ala., added, "Every day we are here, the calendars are running together."

Obama has said repeatedly he won't negotiate over raising the debt ceiling, saying Congress has a responsibility to let the Treasury pay bills lawmakers have already incurred.

Obama planned a series of to address the looming prospect of a first-time default on U.S. debt, the White House said.

U.S. News // 1 hour ago
Jury acquits Georgia man of murder in missing teacher cold case
May 20 (UPI) -- A Georgia jury on Friday acquitted a man who confessed to killing a high school teacher in 2005 then later recanted.

U.S. News // 2 hours ago
Virginia lawmaker files lawsuit to limit 2 LGBT books to minors
May 20 (UPI) -- Tim Anderson, an attorney and a Virginia State Delegate, said he filed a lawsuit on behalf of Tommy Altman, who is running for Congress, this week in hopes to prevent two LGBT-themed books from being given to minors.

U.S. News // 5 hours ago
ATF: Privately made firearms make it harder to reduce illegal access to guns
May 20 (UPI) -- Increased output by gun manufacturers as well as privately made firearms drove an exponential increase in firearms available in the United States over the past two decades, according to a new study.

U.S. News // 5 hours ago
Shooting 'like crazy' leaves two dead, eight wounded in Chicago
May 20 (UPI) -- A mass shooting on Chicago's north side Thursday night left two people dead and eight wounded. At least one person was arrested and a weapon was recovered, according to Chicago police.