The Kaiser Family Foundation report, based on data available from 17 states and the District of Columbia, offers a preview of how premiums for various coverage levels will fluctuate across the country and how much consumers will pay with or without the tax credits available under the ACA, Kaiser said on its website Thursday.

"While premiums will vary significantly across the country, they are generally lower than expected," the study said. "For example, we estimate that the latest projections from the Congressional Budget Office imply that the premium for a 40-year-old in the second lowest cost silver plan would average $320 per month nationally. Fifteen of the 18 rating areas we examined have premiums below this level, suggesting that the cost of coverage for consumers and the federal budgetary cost for tax credits will be lower than anticipated."

Researchers used the data from 17 states and Washington to analyze what young individuals, families of four, and elderly couples living in major metropolitan areas could pay where the exchanges are fully available beginning in October, the foundation said. The researchers also looked what role ACA-provided tax credits would play in lowering monthly costs for lower income consumers.

Under the Affordable Care Act, individuals and families may purchase private health coverage through new state-based exchanges that begin operations in October for coverage beginning Jan. 1, 2014.

U.S. News // 14 minutes ago
Biden signs $40B Ukraine aid package
May 21 (UPI) -- President Joe Biden on Saturday signed a law providing $40 billion in additional aid and equipment to Ukraine to fend off the Russian invasion, the White House announced.

U.S. News // 10 hours ago
Fake heiress Anna Sorokin debuts prison drawings while in ICE custody
May 20 (UPI) -- Anna Sorokin, the convicted scammer who pretended to be an heiress named Anna Delvey, has unveiled a pop-up show of her prison drawings made while in the custody of U.S. Immigration and Customs Enforcement. 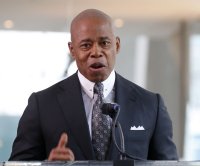