More than 125,000 acres and least 23 buildings have burned, with as many as 4,500 structures in jeopardy from the Rim fire, the San Francisco Chronicle reported.

Authorities said nearly 2,700 firefighters were on duty, with support from water-dropping aircraft.

By Saturday afternoon, the fire was reported 5 percent contained and apparently headed toward thick, dry pine forest, as it threatened power lines 150 miles away in Yosemite National Park, the newspaper said.

"Current wildfire activity throughout the state has stretched our own resources, and those of our partners," said California Office of Emergency Services Director Mark Ghilarducci. "This funding is critical to ensure local and state firefighters have the tools that they need to get the job done."

The San Francisco Public Utilities Commission said Friday water, which reaches the Bay Area through underground pipes, was safe to drink but the commission decided to shut down two of its three main hydroelectric stations, the Chronicle reported.

The shutdown prompted Brown to declare a state of emergency in San Francisco.

The governor's concern was heightened as ash from the massive fire endangered the quality of the city's water supply from Hetch Hetchy, the Chronicle reported.

The blaze has blackened nearly 200 square miles, doubling in size in the space of a day, but firefighters were optimistic of progress.

About 2,700 firefighters from across the United States are involved in containing the fire. Their efforts have been hampered by having to work in steep and largely inaccessible terrain.

Pine Mountain Lake's 2,800 mostly seasonal residents had been ordered to evacuate. Two smaller nearby towns, Groveland and Tuolumne City had been advised, but not ordered, to leave.

More than 5,500 homes are threatened; four have been destroyed.

Yosemite officials shrugged off the possibility the park might have to close.

"If it continues to move in the direction it has in the last day or so, it's just moving into wilderness," said Kari Cobb, a park spokeswoman. "There's no structures, nothing there."

Smoke from the wildfire has blown into Nevada, lowering air quality to unhealthy levels, the Reno Gazette-Journal reported.

The number of people reporting to the emergency room of Reno's hospital with breathing difficulties had increased significantly since Thursday, said a hospital spokeswoman.

In Montana, about 20 families in recreational vehicles have been camped out since late Tuesday in a shopping center parking lot after the Lolo Creek Complex wildfire threatened their lakeside campsite, The Missoulian reported.

The campers have been told they may be able to return by Sunday or Monday.

U.S. News // 31 minutes ago
Kinzinger: Jan. 6 committee to issue 'a significant number of subpoenas'
Aug. 1 (UPI) -- Rep. Adam Kinzinger said he expects the select committee investigating the Jan. 6 riot at the Capitol to issue many subpoenas including against House Republican leader Kevin McCarthy and others who spoke to Donald Trump. 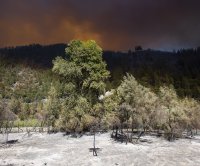