A Palestinian Salafist hold a poster depicting Syria's President Bashar al-Assad (R) and Egypt's army chief General Abdel Fattah al-Sisi with the Arabic words that read "criminals and murderers", during a rally in protest of what they say are recent massacres committed against Syrian and Egyptian people, in Rafah in the southern Gaza , August 22, 2013. UPI/Ismael Mohamad | License Photo

"We have to think through strategically what's going to be in our long-term national interests," Obama told CNN in an exclusive interview aired Friday.

The president spoke of "troublesome" claims by anti-regime activists in Syria that President Bashar Assad's government used chemical weapons in an attack in which more than 1,300 people were reportedly killed.

RELATED U.S. officials in flurry of talks on Syria

The president said officials were "right now gathering information" and that "what we've seen indicates that this is clearly a big event of grave concern."

Obama said U.S. officials are pressing for action from the United Nations and are calling on the Syrian government to allow a U.N. investigation team access to the site of the alleged attack outside Damascus.

"We don't expect cooperation" from the Syrian government, Obama told CNN while on a two-day bus tour of New York and Pennsylvania touting his plan to make a college education more affordable to more people. He kicked off his tour in Buffalo, N.Y.

The president warned that U.S. "core national interests" were in play in Syria's civil war, "both in terms of us making sure that weapons of mass destruction are not proliferating, as well as needing to protect our allies, our bases in the region."

Obama has been criticized by his 2008 presidential opponent, Arizona Sen. John McCain, who recently said on CNN that America's credibility in the region was harmed because of a slow response in both Syria and Egypt.

"I am sympathetic to Senator McCain's passion for helping people work through what is an extraordinarily difficult and heartbreaking situation, both in Syria and in Egypt," Obama said. "But what I think the American people also expect me to do as president is to think through what we do from the perspective of what is in our long-term national interests."

Obama was asked about a growing congressional push to cut more than $1.2 billion in U.S. aid to the military-backed government in Egypt, where a military crackdown on supporters of deposed President Mohamed Morsi has killed about 900 people.

"My sense ... with Egypt is that the aid itself may not reverse what the interim government does," Obama told CNN. "But I think what most Americans would say is that we have to be very careful about being seen as aiding and abetting actions that we think run contrary to our values and our ideals."

The president said his administration was "doing a full evaluation of the U.S.-Egyptian relationship" and there is "no doubt that we can't return to business as usual, given what's happened."

RELATED U.S. trying to get the facts on alleged chemical attack in Syria

Turning to a hot domestic issue, Obama said a threat by conservatives to try to shut down government after Sept. 30 to try to defund the Affordable Care Act, known colloquially as Obamacare, is inappropriate. The fiscal year and a continuing resolution to keep the government running both end Sept. 30.

Conservatives in the Republican-controlled House are using the possibility of a partial government shutdown and the need to raise the federal debt limit as chits to force new budget cuts and defund the president's signature healthcare reform law.

"There is nobody out there who thinks that us not paying bills we've already racked up is good for the economy [or] is appropriate," Obama told CNN. "Nobody thinks that."

As for shutting down the government, that's "bad for not just people who work for the government but all the contractors ... and the defense folks and everybody who is impacted by the services that they receive from the federal government," Obama said.

Obama expressed confidence that no one at the NSA is "trying to abuse this program or monitor people's email." But, he said, there are legitimate concerns" about rapidly evolving surveillance technology.

"What I recognize is that we're going to have to continue to improve the safeguards," he said. "And as technology moves forward, that means that we may be able to build technologies that give people more assurance."

U.S. News // 14 minutes ago
U.S. submarine's grounding 'preventable,' says Navy probe
May 24 (UPI) -- A U.S. Navy investigation into October's grounding of a U.S. submarine on a seamount in the South China Sea has found the incident was "preventable." 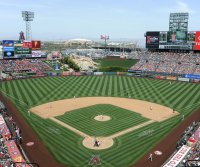 U.S. News // 5 hours ago
Anaheim mayor resigns amid FBI probe into Angel Stadium sale
May 23 (UPI) -- Anaheim Mayor Harry Sidhu resigned Monday amid an FBI investigation into allegations that he sought to exchange insider information about the sale of Angels Stadium for campaign donations.