Hundreds of protesters participate in a "Justice for Trayvon" rally at the federal courthouse in downtown Los Angeles on July 20, 2013. The demonstration was part of a 100-city effort to demand a federal investigation into possible violations of Travyon Martin's civil rights. A jury in Sanford, Florida last Saturday found George Zimmerman, a volunteer neighborhood watchman, not guilty of shooting Martin dead, a 17 year-old unarmed teen on the night of February 26, 2012. UPI/Jim Ruymen | License Photo

WASHINGTON, July 23 (UPI) -- Sixty-eight percent of blacks surveyed in a Gallup poll said the American justice system is biased against blacks while only 25 percent of whites agreed.

In the past 20 years, whites have become less likely to perceive bias, the poll indicated. In 1993, 33 percent of whites surveyed in a similar poll said the justice system is biased against blacks -- 8 percentage points higher than the most recent study.

The poll of 2,541 Americans was conducted after George Zimmerman's not guilty verdict in the killing of 17-year-old Trayvon Martin was handed down, Gallup said.

Overall, 43 percent of those surveyed said the verdict was right, while 40 percent said it was wrong.

Gallup said the results are almost exactly the opposite from O.J. Simpson's innocent verdict in 1995 when 89 percent of blacks said the jury was right while 53 percent of whites said the decision was wrong.

The poll was conducted July 16-21. The sampling error is 2 percentage points, Gallup said.

U.S. News // 3 hours ago
U.S. expresses 'deep concern' of Russia's military buildup near Ukraine
April 19 (UPI) -- The United States on Monday expressed its "deep concern" over the Kremlin's plan to block foreign naval ships and other state vessels from the Black Sea.

U.S. News // 6 hours ago
Suspect identified in Wisconsin bar shooting that killed 3, injured 3 others
April 19 (UPI) -- Authorities on Monday identified a 24-year-old man arrested in connection with a weekend mass shooting that left three people dead and three others injured at a Kenosha, Wis., bar. 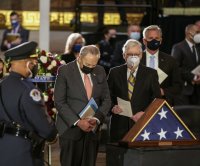 U.S. News // 11 hours ago
Fiery Tesla crash in Texas kills 2 men, no one in driver's seat, authorities say
April 19 (UPI) -- Two people died when a Tesla going at a high speed with no one in the driver's collided into a tree and caught fire in an area near Houston, Texas, authorities said Monday.