The website said Saturday Rubio, R-Fla., met with Boehner, R-Ohio, at the speaker's office Wednesday to discuss the so-called Gang of Eight reform plan that Rubio and others had worked out in the Senate.

Politico said the meeting was a tantalizing clue as to how Boehner planned to manage immigration in the House, where a prickly conservative GOP wing is considered unlikely to go along quietly with any bill passed in the Democrat-controlled Senate.

Boehner has told colleagues he was aiming for a vote before the end of the summer, Politico said.

The conservatives, however, appeared to be gearing up for a battle. Rep. Michele Bachmann, R-Minn., told rock-ribbed conservative commentator Glenn Beck that opponents of immigration reform needed to let their representatives know how they feel.

"This is the most important item in the next four years, what's going to happen in the next couple weeks. ... We have a very short window, six weeks, to kill this bill," Bachmann said.

Bachmann and other lawmakers appearing with Beck accused the Republican leadership of soft-selling immigration reform in order to lull conservatives into accepting the bill, Politico said. "It's the only way we can mobilize our conference to get informed, for one thing, because they're getting selected information that's designed to promote the bill," said Rep. Steve King, R-Iowa, said.

Meanwhile, the Obama administration used the first anniversary of the controversial Dream Act to urge Congress to quickly pass an immigration reform bill.

"Today thousands of ambitious, hardworking young people have been able to emerge from the shadows, no longer living in fear of deportation," the White House said Saturday in a written statement. "But the steps we took were never meant to be a permanent solution. That's why we need Congress to pass a bipartisan, commonsense immigration reform bill as soon as possible."

U.S. News // 9 hours ago
Tennessee police ID victim, gunman in grocery store shooting
Sept. 24 (UPI) -- Police on Friday released the identities of the victim killed in a mass shooting at a Tennessee grocery store this week as well as the gunman.

U.S. News // 19 hours ago
Criticized Arizona election audit to show Biden won more votes than Trump
Sept. 24 (UPI) -- The results of a widely criticized Republican audit of election ballots in Arizona are set to be released Friday -- although a draft report indicates that they will show an even larger margin of victory for Joe Biden. 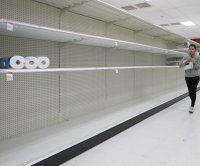 U.S. News // 19 hours ago
Costco brings back limits on toilet paper, other items due to panic buying
Sept. 24 (UPI) -- Discount retailer Costco says it's again limiting purchases for some items, including toilet paper and bottled water, due to supply chain issues and renewed demand amid COVID-19 surges nationwide.