McCain, a member of the bipartisan "Gang of Eight" of senators that has been working on legislation suitable to both parties, fielded questions and comments from some who expressed frustration at the pace of reform and others who supported more stringent deportation programs, CNN reported Wednesday.

"I cannot tell you that I'm sure that we will reach a conclusion," McCain said Tuesday, adding, "We believe that there is a good, strong possibility that we come up with a plan and a proposal that most Americans would support."

"All I can say is that I'm guardedly optimistic," he said, adding that the senators have received "pledges of cooperation" from the White House.

Concerning gun control, McCain said 80,000 background checks on potential gun purchasers were denied in 2012 because the person had a criminal record or for some other reason, the Arizona Daily Star in Tucson reported. He said 44 people were prosecuted.

"Why don't we tighten up on the people who are in violation of the background checks? Why don't we start out with that to keep guns out of the hands of criminals?" McCain said. "That's one of the measures we can take."

He said criminal background checks themselves could be tightened, saying Jared Loughner, who killed six people and wounded 13, including former Rep. Gabrielle Giffords, D-Ariz., two years ago during a shooting spree, passed a background check even though he suffered from extreme mental illness, was deemed unfit for military service and was expelled from a community college.

Turning to border security, McCain said: "We need some more Border Patrol agents and we need more fencing. But we also need to use and implement the technology that we developed in Afghanistan and Iraq."

McCain said the attack on the U.S. Consulate in Benghazi, Libya, in which Ambassador Christopher Stevens and three other diplomatic employees died, could have been prevented and too many unanswered questions remain, the Star said.

"We still don't know -- what did the president do on the night of the attack?" McCain said.

U.S. News // 7 hours ago
3 firefighters killed, another critically injured in Baltimore roof collapse
Jan. 24 (UPI) -- Three Baltimore firefighters were killed and another was trapped Monday when a roof collapsed during a two-alarm fire at a vacant home, fire officials said.

U.S. News // 5 hours ago
House lawmakers call for ban of stock trading by Congress members
Jan. 24 (UPI) -- A new letter signed by 27 members of the House asks that members of Congress be banned from trading or owning stocks. 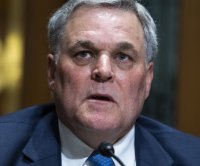