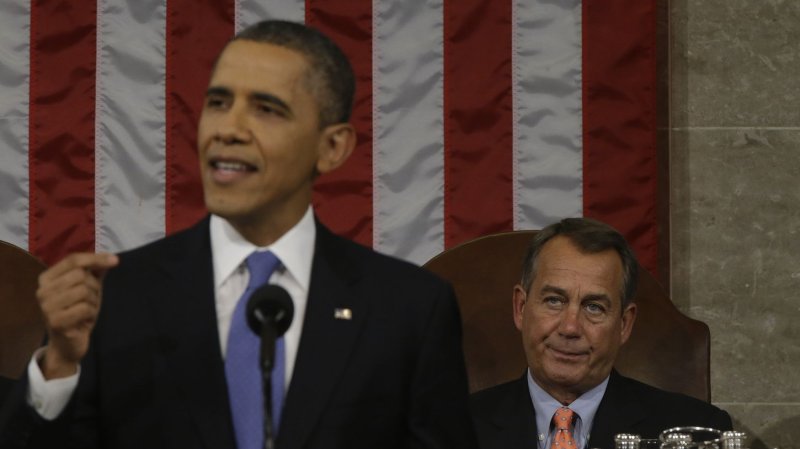 House Speaker John Boehner of Ohio listens at right as President Barack Obama gives his State of the Union address during a joint session of Congress on Capitol Hill in Washington, DC on February 12, 2103. UPI/Charles Dharapak/Pool | License Photo

"Having first proposed and demanded the sequester, it would make sense that the president lead the effort to replace it," the Ohio Republican said in an op-ed piece published Wednesday in The Wall Street Journal.

"Unfortunately, he has put forth no detailed plan that can pass Congress, and the Senate -- controlled by his Democratic allies -- hasn't even voted on a solution, let alone passed one," Boehner's piece said.

"By contrast, House Republicans have twice passed plans to replace the sequester with common-sense cuts and reforms that protect national security," Boehner wrote.

The sequester is the Washington term for federal domestic and military spending cuts set to be automatically triggered in nine days and run through September unless Congress intervenes.

The cuts -- established as part of the 2011 deal to raise the federal debt limit -- represent a small slice of the government's annual $3.5 trillion budget and big-ticket programs such as Social Security and Medicare benefits are exempt from them.

The Daily Beast website reported Wednesday Boehner's office called on Republicans in July 2011 to agree to the sequester "to guarantee that Congress" take action on debt-reduction. The cuts were initially seen as so draconian Congress would enact a more targeted deficit-reduction deal to make comparable savings but no such deal has been reached.

Congress is on a winter recess and is to return next week, just days before the March 1 deadline -- which already was moved once, at the start of the year, to give Republicans and Democrats additional time to negotiate.

U.S. Rep. Jim Bridenstine, R-Okla., told a town hall meeting Tuesday he is concerned that House Republicans have been "caving too much" and that "once the sequester takes effect, people are going to be screaming for a deal, and that deal ultimately is going to be what the president wants -- to raise taxes."

"And if there's enough pressure, (Boehner) will bring it to the floor and 200 Democrats and 30 or 40 Republicans will vote for it," Bridenstine told constituents in Bixby, Okla. "And once again you have the speaker caucusing with the Democrats."

"Republicans' willingness to do what is necessary to save [safety-net and retirement-security] programs is well-known," Boehner said in his piece. "But after four years, we haven't seen the same type of courage from the president."

Boehner's criticism came after Obama -- who has proposed a deficit-reduction strategy that includes curbs on tax breaks for upper-income people -- warned military readiness and vital domestic services would be hurt "if Congress allows this meat-cleaver approach to take place."

"These cuts are not smart, they are not fair, they will hurt our economy, they will add hundreds of thousands of Americans to the unemployment rolls. This is not an abstraction -- people will lose their jobs," Obama said at the White House with uniformed firefighters, police officers and emergency medical technicians who could lose their jobs if the cuts go into effect.

Administration officials have said if the cuts go through, many federal employees would likely be furloughed one day a week, which could affect certain federal operations including meat inspection and law enforcement.

Some Republican lawmakers have proposed alternative savings that would spare military cuts but not domestic.

"The ideas that the Republicans have proposed ask nothing of the wealthiest Americans or biggest corporations, so the burden is all on first responders or seniors or middle-class families," Obama said, adding those proposals would "slash Medicare and investments that create good middle-class jobs."

"And so far at least, what [Republicans have] expressed is a preference where they'd rather have these cuts go into effect than close a single tax loophole for the wealthiest Americans -- not one," Obama said.

The dueling remarks came after Alan Simpson, a former GOP senator from Wyoming, and Erskine Bowles, a former chief of staff to Democratic President Bill Clinton, proposed a plan that would reduce the deficit $2.4 trillion through spending cuts and a tax-system overhaul. The amount is $900 billion more than the $1.5 trillion White House officials have said is their goal.

Simpson and Bowles were co-chairmen of a White House bipartisan deficit-reduction panel created in February 2010 to find ways to reduce the mounting federal debt. The panel's package of tax and spending changes fell three votes short of the required 14-vote support from its 18 members that would have sent the proposal to Congress for a vote.

House GOP leaders haven't yet detailed the size of the deficit-reduction package they will propose. They have said it would balance the budget within 10 years, which The Wall Street Journal said would put it in the $4 trillion range.

Republicans have said it wouldn't include any tax increases.

The Issue: No sign partisan split on handling deficit will ease

U.S. News // 3 hours ago
Judge finalizes verdict for Depp vs. Heard defamation trial
June 25 (UPI) -- A Virginia judge has finalized the verdict in the defamation case between Johnny Depp and Amber Heard after the former couple failed to reach a settlement.

U.S. News // 4 hours ago
Laundrie admits to killing Petito in notebook pages, calls it 'merciful'
June 25 (UPI) -- Brian Laundrie wrote in his notebook that he thought his killing of fiancée Gabby Petito last year in Wyoming was "merciful," pages released by his family attorney show.

U.S. News // 7 hours ago
Southwest showers, storms to keep fire risk at bay
While the rain will help dent the ongoing drought and keep wildfire concerns at bay, too much rain at once can lead to the opposite problem, with flash flooding a possibility.

U.S. News // 8 hours ago
Protests rage on for second day against abortion ruling
June 25 (UPI) -- Activists took to the streets for a second day to protest after Friday's Supreme Court decision overturned nearly 50 years of federal abortion rights guaranteed under Roe vs. Wade.