AMARILLO, Texas, Feb. 17 (UPI) -- The Texas millionaire founder of the "Cadillac Ranch" outside Amarillo, Texas, has settled civil suits with 10 men alleging he paid them for sex as teenagers.

Stanley Marsh III, along with his son, Stanley Marsh IV, Gwendolyn Marsh and family associate David Weir, were named in the lawsuits, that alleged the millionaire plied the plaintiffs, minors at the time, with money, drugs and in some cases sports cars, to perform sex acts in his Amarillo office and at his home.

Marsh III, 75, is charged with six counts of child sexual abuse and five counts of sexual performance by a child, second-degree felonies punishable by two to 20 years in prison and a fine of up to $10,000 on each count, the Amarillo (Texas) Globe-News said. He has pleaded not guilty.

Terms of the settlement were sealed, lawyers for both sides said.

Marsh III suffered an incapacitating stroke prior to the lawsuits having been filed, a fact his defense team noted in questioning the plaintiffs' motives.

"The criminal charges against Stanley Marsh 3 are mere allegations by the group of accusers who have filed a barrage of civil lawsuits against Marsh seeking millions of dollars," a statement by Marsh III's legal team said at the time of his arrest in November. "Instead of immediately reporting any alleged wrongdoing to the police, the group strategized, conferred and waited. After Stanley Marsh 3 suffered a massive stroke and became legally incapacitated, the group implemented their plan to become multimillionaires by signing contracts with an aggressive personal injury lawyer from Houston," the statement said. "The investigation into the group's claims is far from complete." 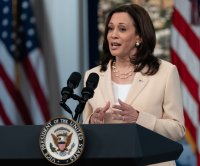 U.S. News // 9 hours ago
Biden nominates 'Miracle on the Hudson' pilot Sullenberger to be ambassador
June 15 (UPI) -- Chesley "Sully" Sullenberger III, the pilot who landed a US Airways flight in the Hudson River after a bird strike, was nominated Tuesday to be an ambassador.
Advertisement