A recent survey of the American Academy of Matrimonial Lawyers said 59 percent of the nation's top divorce attorneys have seen an increase in the number of cases using evidence taken from dating websites during the past three years.

Sixty-four percent of respondents said Match.com was the top website cited in online dating website evidence, followed by 9 percent who said eHarmony and 27 percent who listed other choices.

Relationship status was the most common evidence item mentioned at 57 percent, while 15 percent cited salary and occupation and 7 percent said parental status.

"Dating website users can often face temptation to embellish some personal information on profiles, but this lack of honesty could prove costly for someone in the middle of a divorce or child custody case," Alton Abramowitz, president of the AAML, said in a statement. "Identifying yourself as single when you are not, or listing that you have no children when you are actually a parent, can represent some key pieces of evidence against you during the divorce process."

The American Academy of Matrimonial Lawyers is comprised of the top 1,600 matrimonial attorneys throughout the nation, who are recognized experts in the specialized areas of matrimonial law.

No further survey details were provided.

U.S. News // 1 minute ago
CDC panel to vote on whether to authorize Moderna, J&J COVID-19 boosters
Oct. 21 (UPI) -- An advisory panel of the CDC is scheduled to vote Thursday whether to authorize booster doses of COVID-19 vaccines from Moderna and Johnson & Johnson, which would be a final step in the process.

U.S. News // 37 minutes ago
Southwest says it lost $75 million over flight cancellations this month
Oct. 21 (UPI) -- Several days of delays and cancellations earlier this month ended up costing Southwest Airlines $75 million, the carrier showed in its earnings report on Thursday. 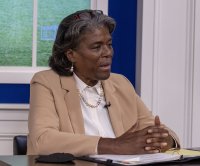