It's never too early to look ahead to the 2014 midterm elections for the U.S. Congress -- and retirements could throw a couple of monkey wrenches into party challenges.

Just last week, two senators -- one from each party -- announced this term would be their last.

Chambliss likely would have faced a primary challenge from the right after he said he'd consider breaking the "no tax pledge" of Americans for Tax Reform led by Grover Norquist.

Earlier, Sen. John D. Rockefeller IV, D-W.Va., announced he would retire at the end of his term -- and already Rep. Shelley Moore Capito, a Republican whose father once governed the state, announced her intentions to seek his seat.

And Republican Whip John Cornyn of Texas also could expect a primary challenge next year.

"I don't know how good of a primary challenge he is going to get at this point, but he will get a primary challenge," Dean Wright, co-founder and director of New Revolution Now in Austin told Roll Call. "There is vetting going on."

Cornyn has said he doesn't take re-election for granted and expects a primary challenge.

Insiders agree he could be challenged, but were skeptical a challenger could win.

Since Cornyn is considered "part of the establishment, maybe he'll draw a primary opponent, but I don't anticipate any strong opponent," a Texas GOP operative said.

But for Republicans to regain control of the Senate -- after missing what many observers said was a golden opportunity in 2012 -- they still have to get through their party primaries, which have sometimes been their downfall in the general election.

Competitive Republican primaries proved costly in the general election in several states in the 2010 and 2012 cycles, whether the damage was caused by flawed nominees, a war chest that went dry or major blunders on the campaign trail.

Can the Republicans avoid the pitfalls in 2014?

"My guess is there will be competitive primaries in most of these places. Open seats and vulnerable Democrats don't come around very often, so it makes sense that more than one person in the state wants to run for that seat," GOP strategist Rob Jesmer, a former National Republican Senatorial Committee executive director, told Roll Call. "It's something we've had to deal with previously, and I think we'll have to deal with in the future."

"There's no doubt that the retirements of at least two Democrats in key states represent good news and add to growing momentum for Senate Republicans," NRSC spokesman Brian Walsh said. "But it's a long cycle ahead, and so our side will stay focused, do the hard work and take nothing for granted."

More retirements are likely to come, and there is a push from Democratic leaders for senators considering retirement to announce sooner rather than later as the party is defending 20 of the 33 Senate seats up this cycle.

"If retirements are going to happen at all, it's helpful for them to happen early," J.B. Poersch, a former executive director of the Democratic Senatorial Campaign Committee and an adviser to the Senate-focused outside group Majority PAC, told Politico. "There's plenty of time to respond. So we can find good candidates."

With Chambliss' retirement, Georgia gives Democrats potentially their best pickup opportunity, even though the state hasn't voted Democratic for president since 1992. The reason it's attractive is because the Republican primary is expected to attract a serious number of candidates from the congressional and state ranks.

The Democratic seats in Iowa and West Virginia are more at risk, but again, it depends on what happens in the Republican primaries and whether they're drawn out and money-draining, analysts said.

"South Dakota's Tim Johnson, a Democrat, may retire -- and even if he doesn't, ex-Gov. Mike Rounds, a Republican, will be a very strong challenger, assuming he runs, which is likely," Kondik said.

The group is highlighting West Virginia's Capito, along with Reps. Rodney Davis of Illinois, Gary Miller of California, and Daniel Webster and Bill Young, both in Florida.

"During the 2012 election, women voters from coast to coast rejected the Republican's anti-woman agenda," EMILY's List President Stephanie Schriock said in a statement posted on the organization's website. "But members of Congress like Capito, Davis, Miller, Webster and Young are doubling down on insane policies that would roll back the clock on women's rights and opportunities." 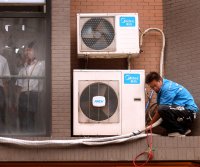