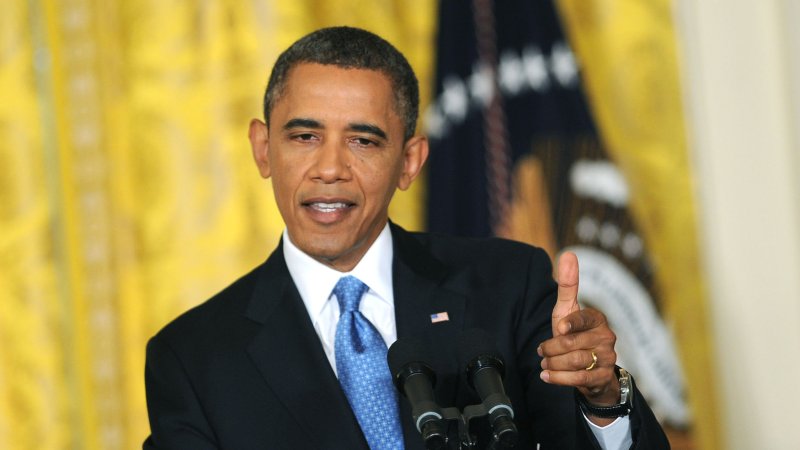 "My starting point is not to worry about the politics," Obama said during a news conference Monday. "My starting point is to focus on what makes sense, what works, what should we be doing to make sure that our children are safe and that we're reducing the incidence of gun violence."

He said the task force Vice President Joe Biden led met with numerous stakeholders and developed a "list of sensible, common sense steps that can be taken to make sure that the kind of violence we saw at Newtown [Conn.] doesn't happen again."

A month ago in Newtown, Adam Lanza killed his mother, then drove to an elementary school where he fatally shot 20 children and six adults before committing suicide.

"I expect to have a fuller presentation later in the week to give people some specifics about what I think we need to do," Obama said.

Freshman Rep. Steve Stockman, R-Texas, threatened to file articles of impeachment against Obama if he exercises executive privilege "to infringe on our constitutionally protected right to keep and bear arms [which] is an unconstitutional and unconscionable attack on the very founding principles of this republic."

"The president's actions are an existential threat to this nation," Stockman said in a statement. "Any proposal to abuse executive power and infringe upon gun rights must be repelled with the stiffest legislative force possible."

RELATED Politics 2013: All sides wrestle with how to address gun violence

Obama said he believed something could be developed "in a sensible way that comports with the Second Amendment. ... We're going to have to come up with answers that set politics aside. And that's what I expect Congress to do."

Obama repeated his desire for stronger background checks, eliminating high-capacity ammunition magazines and an assault weapons ban "that is meaningful."

"Will all of them get through this Congress? I don't know," Obama said. "But what's uppermost in my mind is making sure that I'm honest with the American people and with members of Congress about what I think will work, what I think is something that will make a difference and ... if there is a step we can take that will save even one child from what happened in Newtown, we should take that step."

By way of example Obama said better gathering and tracking of data on guns that wind up with hands of criminals could be one area that wouldn't require legislation.

"I think that those of us who look at this problem have repeatedly said that responsible gun owners, people who have a gun for protection, for hunting, for sportsmanship, they don't have anything to worry about," Obama said.

"The issue here is not whether or not we believe in the Second Amendment," he said. "The issue is: Are there some sensible steps that we can take to make sure that somebody like the individual in Newtown can't walk into a school and gun down a bunch of children in a -- in a shockingly rapid fashion?"

On the Sunday talk-show circuit, gun control was the topic of discussion.

"I would say that the likelihood is that they are not going to be able to get an assault-weapons ban through this Congress," National Rifle Association President David Keene told CNN's "State Of the Union."

"Newtown fundamentally changed things. And the NRA just does not get this," Murphy said.

U.S. News // 2 hours ago
Earthquake felt in northern part of South Carolina for the second time in a week
June 30 (UPI) -- A 3.5 magnitude earthquake shook an area near Elgin, S.C. on Wednesday, its second measurable earthquake within a week, according to the U.S. Geological Survey.

U.S. News // 10 hours ago
REPO task force freezes $30B of Russian oligarch assets
June 30 (UPI) -- A multinational task force launched following Russia's invasion of Ukraine to crack down on sanctioned Russian oligarchs said it has blocked or seized more than $30 billion in assets.