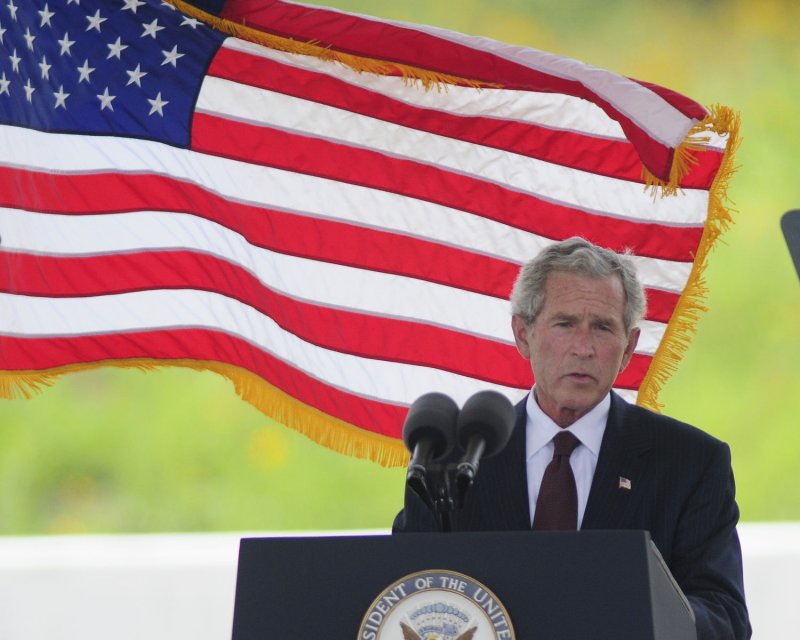 Then-President George Bush addresses the crowd before the unveiling of the "Wall of Names" at the dedication of the Flight 93 National Memorial on September 10, 2011. UPI/Archie Carpenter | License Photo

"As our nation debates the proper course of action relating to immigration, I hope we do so with a benevolent spirit and keep in mind the contribution of immigrants," he said Tuesday at a conference co-hosted by the Federal Reserve Bank of Dallas.

"Not only do immigrants help build our economy, they invigorate our soul," Bush said.

As U.S. House Republicans prepare to restart talks with Democrats on immigration reform, their allies are raising money to support those efforts, The Wall Street Journal reported. As part of their efforts, Republicans are forming a super PAC -- Republicans for Immigration Reform -- to support congressional members backing immigration legislation who may face primary challengers in the next election cycle.

RELATED Immigrants: It's time for Obama to act on reforms

Also Tuesday, about 250 evangelical Christians, representatives of business and law-enforcement officials gathered in Washington to press Congress on immigration overhaul.

Democrats and Republicans are pushing for a comprehensive bill that would, among other things, include stepped-up border-security measures, employment verification to prevent firms from hiring undocumented workers as well as a path to citizenship for the 11 million illegal immigrants.

Still, many Republicans remain opposed, particularly to the citizenship path.

In the House, a bipartisan group has been meeting since 2009 to develop an immigration bill and has legislation ready to go, people knowledgeable about the discussions told the Journal.

Obama has said he would start the immigration debate early next year.

Some organizations argue that breaking the issue into smaller chunks would be more likely to produce results, given the opposition to an amnesty program.

But Richard Land, president of the Southern Baptist Convention's policy arm, warned that if Republicans want to be contenders for national leadership, "they are going to have to change their ways on immigration reform."

The Rev. Samuel Rodriguez, president of the National Hispanic Christian Leadership Conference, was blunt and biblical.

"They must cross the proverbial Jordan of immigration reform," he said, "if they want to step into the promised land of the Hispanic electorate."

U.S. News // 9 hours ago
U.S. sues Arizona over proof of citizenship voting law
July 5 (UPI) -- The Department of Justice filed a lawsuit against Arizona over a new state law that would require residents to provide proof of U.S. citizenship to vote in federal elections.

U.S. News // 8 hours ago
Uvalde, Texas, victims aren't getting compensated from state fund as intended, officials say
July 5 (UPI) -- State Sen. Roland Gutierrez and Uvalde Mayor Don McLaughlin said families of the Uvalde shooting victims are experiencing delays in getting compensation from the state and that the compensation has been insufficient.

U.S. News // 17 hours ago
Illinois attack was one of several deadly shootings across U.S. over July 4th holiday
July 5 (UPI) -- Deadly gun violence marred July 4th celebrations in a number of cities across the U.S. over the weekend, highlighting what political leaders say is the ongoing result of insufficient regulations at the national level.