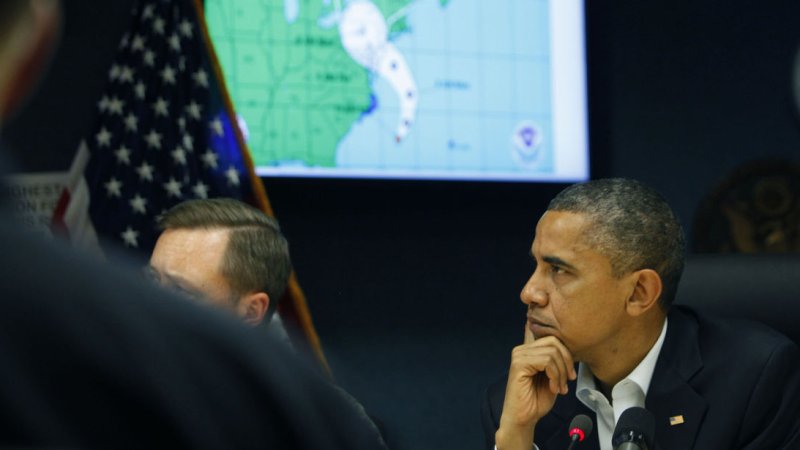 After meeting Sunday with Federal Emergency Management Agency Administrator Craig Fugate at FEMA headquarters in Washington, and then speaking by telephone with governors of states threatened by the storm, the president said "everybody is confident that the staging process, the prepositioning of resources, commodities, equipment that are going to be needed to respond to this storm are in place."

"But as Craig has emphasized, this hasn't hit landfall yet, so we don't yet know where it's going to hit, where we're going to see the biggest impacts," he said. "And that's exactly why it's so important for us to respond big and respond fast as local information starts coming in.

"This is a serious and big storm," Obama said. "And my first message is to all the people across the Eastern Seaboard, Mid-Atlantic, going north, that you need to take this very seriously and follow the instructions of your state and local officials, because they are going to be providing you with the best advice in terms of how to deal with this storm over the coming days."

Fugate urged the public to heed evacuation orders and take measures to prepare for the storm -- including steps posted at Ready.gov.

Obama signed declarations of a state of emergency in the District of Columbia, New York, Massachusetts and Maryland, and ordered federal aid to supplement state and local response to the storm.

The president who flew to Florida Sunday evening for campaigning in Orlando Monday, canceled a side trip to Youngstown, Ohio, scheduled for later in the day and will return to Washington to monitor the storm's progress, the White House said.

The National Hurricane Center in Miami said Sandy could generate life-threatening storm surge flooding along the Mid-Atlantic Coast, including Long Island Sound and New York Harbor, along with coastal hurricane winds and heavy snows in the Appalachians.

The hurricane center said in its 11 p.m. EDT update that Sandy was 470 miles south-southeast of New York with top sustained winds of 75 mph. The storm was moving northeastward at 14 mph.

The storm was expected to turn to the north and then the northwest Sunday night and early Monday. On its forecast track, the center of the storm is expected to be near the Mid-Atlantic Coast Monday night.

The hurricane center said hurricane-force winds are expected along portions of the coast between Chincoteague, Va., and Chatham, Mass., including the tidal Potomac from Cobb Island to Smith Point.

The Middle and Upper Chesapeake Bay, Delaware Bay, and the coasts of the northern Delmarva Peninsula, New Jersey, the New York City area, Connecticut and Rhode Island also are forecast to receive the hurricane's brute force.

Tropical storm conditions were being reported over coastal North Carolina and southeastern Virginia.

Forecasters said winds could be at hurricane force when Sandy makes landfall, and then weaken as it moves inland.

Commuter rail service in New York will be suspended as the huge storm lumbers along the U.S. East Coast on a path to bring it ashore in northern New Jersey overnight.

"I do think Monday and Tuesday are going to be difficult days," said Joseph Lhota, chairman of the Metropolitan Transit Authority.

Neighboring New Jersey evacuated coastal areas and ordered casinos along the Atlantic City boardwalk to close Sunday afternoon. The (Newark, N.J.) Star-Ledger said toll booths on the Jersey Turnpike were shut down to speed up the flow of traffic away from the shore.

The suspension of public transportation was only part of the hurried preparations under way along the East Coast. The New York Times said hardware stores and supermarkets were mobbed this weekend.

Utilities were on full alert and warned coastal residents to expect lengthy power outages during and after the storm. Airlines grounded scores of flights in advance, leaving travelers to rearrange or cancel their trips.

Sandy is expected to plow headlong into a chilly east-bound winter weather system at some point, which forecasters fear will mean a long stretch of stormy weather stretching well inland.

"This is not just going to be a coastal event," said Rick Knabb, director of the National Hurricane Center.

U.S. News // 9 hours ago
ICE accidentally posts personal info of 6,252 immigrants online
Nov. 30 (UPI) -- U.S. Immigrations and Customs Enforcement is investigating an incident on Monday as personally identifiable data from 6,252 immigrants was posted on its website for about five hours.

U.S. News // 9 hours ago
Ohio man found guilty of 8 counts of murder
Nov. 30 (UPI) -- An Ohio man was found guilty Wednesday of planning and carrying out the 2016 murder of eight members of a family over a custody dispute.