The audio clip, reported earlier Tuesday by the conservative website TheBlaze, was recorded Oct. 19, 1998, at Loyola University in Chicago, although TheBlaze reported noted it had not been able to confirm its authenticity.

During an interview Tuesday on Fox News Channel, Romney defended his characterization of Americans who pay no income taxes as Obama supporters, and twice made reference to the purported Obama audio.

During the 1998 discussion about how government policy can be used to help the working poor, Obama -- who at the time was a freshman Illinois state senator -- apparently said the working poor "are struggling, and to the extent that we are doing research figuring out what kinds of government action would successfully make their lives better, we are then putting together a potential majority coalition to move those agendas forward."

He said there had been "a systematic, I don't think it's too strong to call it a propaganda campaign, against the possibility of government action and its efficacy," to help people "who are working but don't have health insurance, aren't making much money, can't figure out daycare, spend an hour and a half trying to commute to jobs that do exist, don't have much opportunity for enhancing their skills so they could actually move up into an income bracket that would support a family."

While saying some criticism of government "has been deserved," Obama is heard suggesting a limited use of redistribution to help the working poor.

"I think the trick is figuring out how do we structure government systems that pool resources and, hence, facilitate some redistribution?" he said. "Because I actually believe in redistribution, at least at a certain level to make sure that everybody's got a shot."

U.S. News // 42 minutes ago
Bomb cyclone set to blitz Boston with blizzard conditions
A still-developing winter storm is set to become a major nor'easter that will bombard New England with heavy snow and blizzard conditions this weekend. 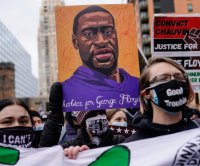