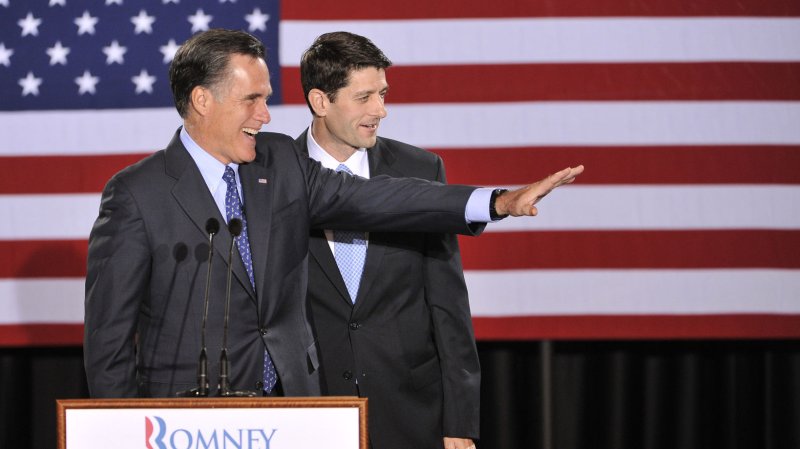 Republican Presidential hopeful Mitt Romney (L) waves as he stands with Rep. Paul Ryan (R-WI) after being introduced at a rally on April 3, 2012 in Milwaukee, Wisconsin. Wisconsin, along with Maryland and Washington D.C. held their primary elections on Tuesday. UPI/Brian Kersey | License Photo

"Today we take a step forward ... with my announcement of Paul Ryan of Wisconsin as my running mate," said Romney in front of the decommissioned battleship USS Wisconsin in Norfolk, Va.

"Paul and I are beginning a journey that will take us to every corner of America," said Romney. "We offer our commitment to create 12 million new jobs and bring prosperity to every American family."

As the crowd waved small American flags, Romney then introduced Ryan as "the next president of the United States" but quickly returned to the podium to correct his flub.

"Every now and then I've been known to make a mistake," he said, "but I didn't with this guy. He's going to be the next vice president of the United States."

Ryan, the pro-business author of a budget plan that would curb spending on programs like Medicare, pledged the economy would make a comeback under a Romney administration, praising Romney as a leader with the background and skills to lead this country. "Gov. Romney is the man for this moment. He and I share one commitment, we will restore the greatness of this country.

"I've been asked by Gov. Romney to serve the country I love," he said. "His leadership begins with character and values."

Ryan pledged a campaign against debt, doubt and despair as the presumptive ticket begins its campaign on a four-day, four-state bus tour of Virginia, North Carolina, Florida and Ohio.

Ryan, 42, a fiscal conservative, is the House Budget Committee chairman who called for reducing the federal deficit almost entirely through spending cuts. His name had been bandied about as being on Romney's short list of possible running mates, along with that of U.S. Sen. Rob. Portman of Ohio and former Minnesota Gov. Tim Pawlenty.

The party sources said Romney called Pawlenty and Portman Friday night to thank them for their support.

U.S. News // 4 hours ago
1 dead, 4 injured in Thanksgiving Day shooting in Nevada
Nov. 27 (UPI) -- Police in Nevada said they have arrested two suspects after an early morning shooting on Thanksgiving left one person dead and four others injured.