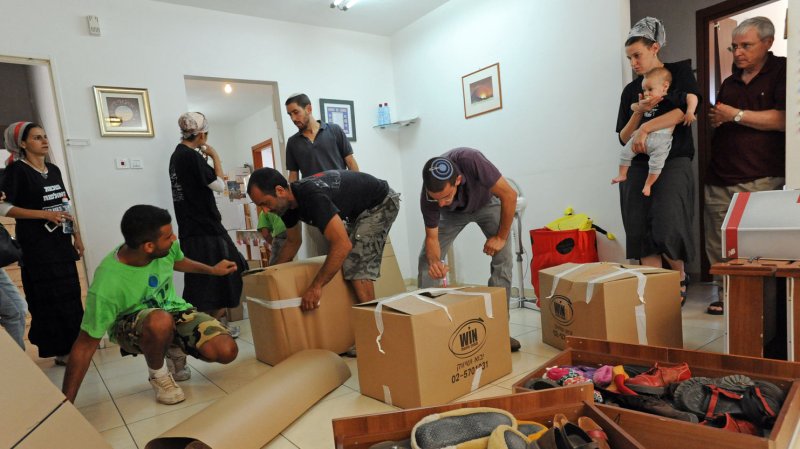 Israeli settlers pack their belongings as part of the agreement with the Israeli government to voluntarily evacuate their homes in the Ulpana Outpost near the Beit El Settlement in the West Bank, June 28, 2012. A total of 33 families are leaving their homes in return for 300 new housing units to be built in the Beit El Settlement. The evacuation of the five buildings in Ulpana was ordered last month by the Israeli High Court of Justice because they were built on privately owned Palestinian land. UPI/Debbie Hill | License Photo

WASHINGTON, July 10 (UPI) -- The United States does not support Israeli settlement activity and opposes legalization of the construction, a State Department official said.

"We do not accept the legitimacy of continued Israeli settlement activity and we oppose any effort to legalize outposts," State Department spokesman Patrick Ventrell told reporters in Washington Monday in response to an Israeli finding West Bank settlements cannot be considered illegal.

The 89-page report submitted to the Israeli government ministerial committee on settlements said Israelis "have the legal right to settle in Judea and Samaria, and the establishment of settlements cannot, in and of itself, be considered illegal," the report said.

A copy of the report obtained by The Jerusalem Post revealed the committee focused its examination on Israel's obligations under international and domestic law and did not consider the peace process or past pledges to the international community, the paper said.

The committee advised the creation of new West Bank settlements should be decided by a government committee and approved by the defense minister or prime minister. Construction within the bounds of existing settlements would not require government approval, just approval from planning and zoning authorities, the paper said.

U.S. News // 2 hours ago
Treasury sanctions executives of Iranian UAV manufacturer
Feb. 3 (UPI) -- The Treasury Department announced sanctions on Friday against the directors of an Iranian unmanned aerial vehicle manufacturer for providing aerial support to Russia for its invasion against Ukraine.

U.S. News // 2 hours ago
U.S. announces $2.4 billion more defense aid to Ukraine
Feb. 3 (UPI) -- The U.S. Department of Defense said Friday Ukraine will get another $2.4 billion in U.S. military aid to further bolster its defense against the Russian invasion.

U.S. News // 3 hours ago
Honda urges owners of certain cars to get airbags repaired immediately
Feb. 3 (UPI) -- Honda is warning owners of vehicles with unrepaired Takata air bags not to drive them and instead bring them in for repair, saying that the risk to drivers could be deadly.