President Barack Obama speaks in the East Room of the White House in Washington, D.C. on June 28, 2012, after the Supreme Court ruled on his healthcare legislation. UPI/Luke Sharrett/pool | License Photo

"The Supreme Court decision upholding the Affordable Care Act is a victory for everyone who believes all Americans are entitled to affordable, quality healthcare," John Gage, president of the American Federation of Government Employees union, said in a statement.

Now that the Supreme Court has upheld the law, Gage said, "It's time for Republican leaders in Congress to stop their campaign to repeal the law and to focus instead on improving the economy and creating jobs."

AARP said in a news release the law also increases the number of people eligible for free preventive care and wellness benefits while cracking down on Medicare fraud, waste and abuse. The organization said the healthcare law would play a role in ending discriminatory health insurance practices such as exclusions based on pre-existing conditions and limit use of age rating "to charge exorbitant premiums for older Americans."

"We look forward to the continued implementation of this critically important legislation so that millions of Americans can continue to receive the benefits it provides," A. Barry Rand, AARP's chief executive officer, said in the release.

"It is now time to put the acrimonious debate behind us and move forward to continue working through the implementation process to produce a healthcare delivery system that meets the needs of all people -- especially those individuals with chronic diseases and disabilities," Weinberg said.

NHC's core membership includes about 50 of the nation's patient-advocacy groups.

The United Steelworkers union, which represents about 850,000 members, applauded the high court's decision but noted opponents want to repeal the law.

"While we celebrate this ruling and applaud the court for standing up for justice and fairness in this nation's healthcare system, we know that this is just the beginning," USW International President Leo W. Gerard said in a news release. "Republicans like Mitt Romney, John Boehner and Mitch McConnell want to take us back to a place where people can be denied coverage because they've been sick, where tens of millions of Americans have no access to healthcare and where our elderly citizens have to decide between putting food on the table and buying their medicine.

"Let me tell you: We are not going back," Gerard said. "Under President Obama's leadership, we have made too much progress to turn back the clock, and too many Americans stand to lose if this law is overturned. This country deserves a system that works for everyone, not just the healthy and the wealthy."

U.S. News // 22 minutes ago
Texas asks Supreme Court to leave abortion ban in place
Oct. 21 (UPI) -- Texas urged the Supreme Court on Thursday to reject the Justice Department's request to block the state's restrictive abortion law, stating the Biden administration has no standing to challenge it. 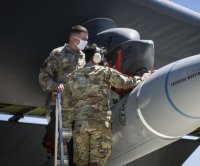 U.S. News // 16 hours ago
AG Garland: DOJ committed to prosecuting 'intolerable' Jan. 6 attack
Oct. 21 (UPI) -- Attorney General Merrick Garland was peppered with questions on a wide range of subjects in early questioning by Republicans and Democrats during his appearance in front of the House Judiciary Committee Thursday.