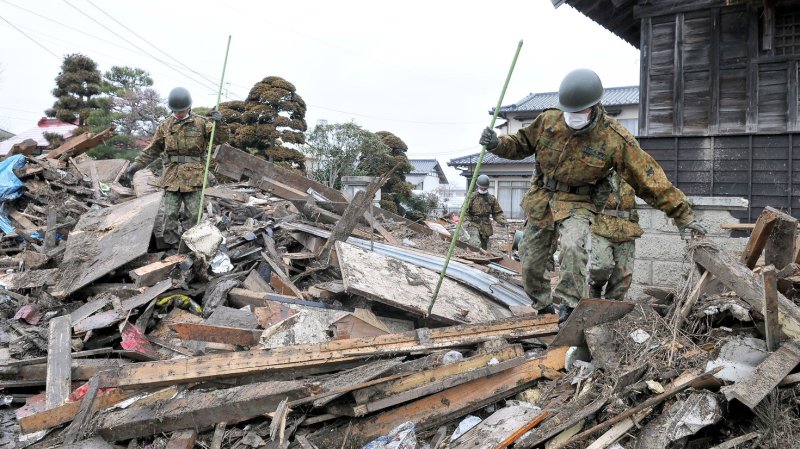 Members of Japan Ground Self-Defense Force search for victims as destruction is seen in Sendai, Miyagi prefecture, Japan, on March 15, 2011. More than 10,000 people are believed to have been killed by a massive earthquake and resulting tsunami. UPI/Keizo Mori | License Photo

NEWPORT, Ore., June 7 (UPI) -- A beach in Newport, Ore., got its first piece of debris -- a floating dock -- generated from last year's tsunami in Japan, state employees and scientists said.

State parks employees and scientists were working to identify and contain any invasive species that may have accompanied the dock, as well as decide what to do with the 66-foot-long, 8-foot-high structure, The (Eugene) Register-Guard reported Thursday.

Returning it to Japan isn't an option, officials said.

"They don't wish to have it returned," said Hirofumi Murabayashi, deputy consul general at the Japanese Consulate in Portland, Ore.

The dock was traced to Misawa, on Japan's northern coast, one of four docks washed away by the March 11, 2011, tsunami.

"The other three, we have no idea where they are," Murabayashi said.

Scientists are examining the species of marine life and vegetation collected from the dock to determine the materials' origins, the newspaper said.

Oregon Parks and Recreation officials said the dock was tested for radiation and "found to be negative," KVAL-TV, Eugene, said.

In a statement Wednesday, U.S. Sen. Ron Wyden, D-Ore., urged the National Oceanic and Atmospheric Administration to "redouble" its efforts to track tsunami-generated debris and to work with local, state and federal agencies to let people know "how best to report suspected debris."

NOAA already has issued two advisories to notify vessels to be alert for the debris, and asked captains of vessels regularly traveling the Pacific Ocean to "let us know what you're seeing," NOAA spokeswoman Dianna Parker said. "If there's something big out there, we can put people on alert."

U.S. News // 3 hours ago
Amber Heard alleges years of abuse as cross examination begins
May 16 (UPI) -- Actress Amber Heard continued to testify in a defamation case brought against her by her former husband, actor Johnny Depp, detailing years of violence she allegedly sustained during their nearly five-year relationship.