Man freed after 26 years in prison

IONIA, Mich., June 7 (UPI) -- A Michigan man who spent 26 years in prison was released after begin cleared of the conviction that he killed his wife and daughters in a house fire.

Prosecutors agreed that David Lee Gavitt, 54, of Ionia, was convicted based on faulty evidence and outdated science, the Detroit Free Press reported Thursday.

"It was a very emotional scene," said David Moran, a law professor and co-founder of the Innocence Clinic at the University of Michigan Law School, which fought for Gavitt's release.

Gavitt walked out of the Carson City Correctional Facility Wednesday, the day after Ionia County Prosecutor Ronald Schafer asked the court to sign an order granting Gavitt a new trial, which the prosecutor said never will be conducted because of the flawed evidence.

RELATED Under the U.S. Supreme Court: A cry of innocence from death row

"We now know that the evidence introduced at trial was not good," Schafer said Wednesday, explaining that he had the evidence re-examined by the State Police, U.S. Bureau of Alcohol, Tobacco, Firearms and Explosives and a private laboratory.

"We are very grateful that he came to the conclusion that David Gavitt should not be in prison any longer," Moran said. "He did what a prosecutor should do, which is to approach a case with an open mind and make a skeptical but honest assessment after consulting with experts."

Gavitt was convicted of first-degree felony and sentenced to life in prison in 1986.

U.S. News // 1 hour ago
NFL earned record $1.8B from sponsorship deals in 2021-22 season, report says
Jan. 26 (UPI) -- Gambling contributed a big chunk of sponsorship revenue the National Football League received over the 2021-22 season, which was close to $2 billion. 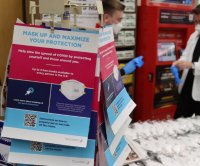 U.S. News // 4 hours ago
Free N95 masks from federal gov't already available in some stores; more coming soon
Jan. 26 (UPI) -- Some of the first grocery stores and pharmacies will begin distributing free N95 masks to provide protection against COVID-19 beginning on Wednesday and continuing through the coming weeks.

U.S. News // 6 hours ago
Prosecutors charge teen in overdose death of 12-year-old girl
Jan. 26 (UPI) -- California prosecutors said they have charged a teenager with murder for selling a fentanyl-laced pill to a 12-year-old girl who died from an overdose.

UNICEF calls for children to be evacuated from Syrian prison