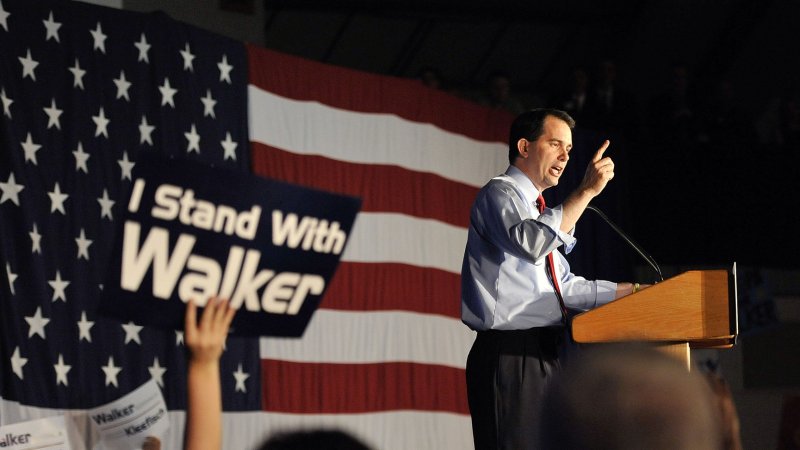 Republican Gov. Scott Walker speaks to supporters at an election night rally on June 5, 2012 in Waukesha, Wisconsin. Walker, who was opposed by Democratic Milwaukee Mayor Tom Barrett, is only the third governor in U.S. history to face a recall election and defeated Barrett by a wide margin. UPI/Brian Kersey | License Photo

The Milwaukee Journal Sentinel reported that with 71 percent of the state's precincts counted, Walker had 56 percent of the vote to 43 percent for the Democratic challenger, Milwaukee Mayor Tom Barrett. Independent candidate Hari Trivedi had 1 percent.

"Bringing our state together will take some time, but I hope to start right away," Walker, who had defeated Barrett by 6 percent points in 2010, said in a statement. "It is time to put our differences aside and figure out ways that we can move Wisconsin forward."

Phil Walzak, a spokesman for the mayor, said shortly before 9 pm. that the race was "way too early to call."

"People are still in line voting and 80 percent of the vote hasn't been counted," he said. "There are still a lot of votes to count."

Turnout for the special election was high, the Wisconsin State Journal reported. Dane County Clerk Karen Peters had predicted the turnout in the county that includes the the state capital of Madison could hit 80 percent to 88 percent. She described turnout as "just wild."

State election officials had predicted 60 percent to 65 percent of the voting age population will cast ballots in the recall election. More than 900,000 signatures were gathered by labor activists to force the recall after Walker pushed through a bill that ended nearly all collective bargaining for public employees.

More than $63.5 million was spent on advertising during the Walker recall campaign, making it the most expensive race in Wisconsin history.

Walker raised more than $30 million to Barrett's more than $5 million. Mother Jones reported two-thirds of Walker money, vs. one-fourth of Barrett money, came from out of state.

There were two other gubernatorial recall elections in U.S. history. Republican North Dakota Gov. Lynn Frazier was recalled in 1921 during a dispute about state-owned industries and Democratic California Gov. Gray Davis was recalled in 2003 over state budget and tax issues.

U.S. News // 11 hours ago
About 1 in 3 Gen Z workers putting off retirement savings
Dec. 5 (UPI) -- Gen Z workers have pushed off saving for retirement at a higher rate than other age groups in the last two years, a new survey finds.

U.S. News // 13 hours ago
Seasonal flu activity high in D.C., RSV 'causing most strain' in W.Va
WASHINGTON, Dec. 5 (UPI) -- It promises to be a severe flu season this winter, as illustrated by a rising number of cases in Washington, among other places nationwide. But a W. Va. health department says RSV has caused the most strain so far.
Advertisement