NEWTON, N.C., May 28 (UPI) -- About 1,200 people gathered in North Carolina to protest a sermon in which the Rev. Charles Worley said gays should be put behind electric fences.

Worley -- speaking on the state's constitutional amendment limiting the legal definition of marriage between one man and one woman -- said gays and lesbians should be locked up behind electric fences, The Charlotte (N.C.) Observer.

"Feed 'em, and you know what? In a few years, they'll die. Do you know why? They can't reproduce," Worley said during a sermon at Providence Baptist Church May 13.

People from throughout North Carolina and neighboring states gathered Sunday at the Catawba County Justice Center in Newton to show support for gay rights, the Observer said.

"(The Rev. Charles) Worley asked for something that he didn't expect," said organizer Laura Tipton. "At this point, it's become so much bigger than him."

U.S. News // 50 minutes ago
Judge rules Harvard owns slave images, not descendants
March 6 (UPI) -- A Massachusetts judge ruled this week that a series of slave images belong to Harvard University, but the ancestor of the subjects who were forced to strip to the waist for the photos plans to appeal. 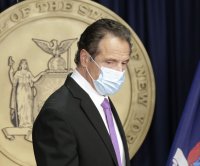