WALLER, Texas, May 24 (UPI) -- Officials at a Houston-area high school said they would overlook a graduation dress code to allow a male student to walk across the stage in female attire.

Brandon Navarro, an openly gay senior at Waller High School, said he had planned to keep his hair long and wear a fitted dress and heels under his graduation gown until a teacher said otherwise, KHOU-TV, Houston reported.

"She was like 'you know you're gonna have to cut your hair right?'" said Navarro. "I said 'well they didn't tell me anything about that. It hasn't been an issue all year. Why is it an issue now?'"

"I'm wearing a dress," said Navarro. "It's right above the knee. It's body fitting. It has tribal print up and down. It's real bright colored."

Navarro, who said he considers himself a cross dresser, will not be allowed to wear hair extensions, heels or earrings, KHOU reported.

U.S. News // 3 minutes ago
Democrats introduce bill to raise debt ceiling, fund government
Sept. 21 (UPI) -- House Democrats on the Appropriations Committee introduced a bill Tuesday to keep the federal government running and suspend the debt ceiling past the 2022 midterms but Republicans are holding firm against it. 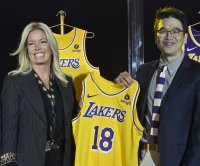 U.S. News // 1 hour ago
LA Lakers sign deal with food company Bibigo for new jersey patch
Sept. 21 (UPI) -- The NBA's Los Angeles Lakers are replacing the sponsorship patch on their uniforms in a deal worth a reported $100 million over five years.

U.S. News // 1 hour ago
Google to expand NYC campus with $2.1B Manhattan building
Sept. 21 (UPI) -- Tech giant Google announced on Tuesday that it will pay more than $2 billion to buy the New York City building where it presently leases ifs offices. U.S. News // 4 hours ago
Johnson & Johnson says COVID-19 booster shot increases protection
Sept. 21 (UPI) -- Johnson & Johnson announced on Tuesday that its one-shot COVID-19 vaccine has performed well in real-world studies, offers long-lasting protection against the virus and boosts the immune system when given as a booster.

U.S. News // 15 hours ago
Summer snow creates wintry scenes around Yellowstone
Astronomical summer might not end for another day, but high-elevation areas in Montana, Idaho and Wyoming all saw their first snowfalls of the season this weekend, with more snow showers in the forecast.

U.S. News // 16 hours ago
Oklahoma sets 7 execution dates after 6-year hiatus
Sept. 20 (UPI) -- The Oklahoma Court of Criminal Appeals on Monday scheduled the executions of seven men, setting the stage for the state to carry out its first lethal injection in more than six years.
Advertisement