The address at the New York University Law School referred to the presumptive Republican presidential nominee's approach to international relations as "dangerously divorced from today's realities" and accused Romney, a former Massachusetts governor, of being "mired in a Cold War mindset," his positions on Russia, Iraq and nuclear arms control "clearly and consistently stuck in the past."

The Obama-Biden campaign billed the address as the first of many that will emphasize what it sees as Romney's shortcomings in foreign policy, The Washington Post said Thursday.

Biden's speech heavily ridiculed some of Romney's previous statements, including Romney's pronouncement in March that "without question, our number one geopolitical foe is Russia."

Biden paused to let the audience laugh before continuing, after which Biden accused Romney of a mentality that viewed foreign policy through a rear-view mirror, The Hill reported.

U.S. News // 9 minutes ago
Judge rules UNC can use race in admissions process
Oct. 19 (UPI) -- A federal judge has ruled that the University of North Carolina at Chapel Hill's use of race in its undergraduate admissions process is constitutional.

U.S. News // 10 hours ago
Trump sues Jan. 6 committee to prevent release of White House records
Oct. 18 (UPI) -- Former President Donald Trump on Monday filed a lawsuit against the House committee probing the Jan. 6 insurrection in a bid to keep it from examining White House records related to the attack. 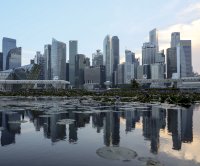