WASHINGTON, April 15 (UPI) -- The Democratic and Republican debate over increasing the amount the wealthiest Americans are taxed is misleading on both sides, some tax experts say.

Democrats, in support of the so-called "Buffet rule," argue Republican presidential candidate Mitt Romney had a tax rate of around 15 percent over the past two tax years whereas the middle class has been taxed as much as 30 percent, McClatchy Newspapers reported Sunday.

"It's stretching things to suggest that 30 percent is what's paid by middle-income taxpayers," said Roberton Williams, a senior researcher at the Tax Policy Center, a joint effort between the centrist Urban Institute and the center-left Brookings Institution.

About 52 percent of all tax returns filed were filed in 2009 by Americans earning between $15,000 and $75,000 -- they would fall into a 15 percent to 25 percent tax bracket. The non-partisan Tax Foundation said those Americans actually paid anywhere from 1 percent to 7 percent of their income in federal taxes.

Republicans, though, are overstating what rich Americans are paying as a percentage, said Leonard Burman, a Syracuse University professor and a leading tax thinker. Many wealthy Americans live off of capital gains and dividends from investments.

"A lot of capital gains are not taxed at all, postponed for quite a while, even indefinitely. If you hold them until you die, you don't pay at all," he said.

U.S. News // 4 hours ago
South Carolina high court delays 2 executions until firing squad available
June 17 (UPI) -- South Carolina's Supreme Court has ordered delays for the executions of two condemned inmates who were scheduled to die this month because the electric chair is still the only method available to them. 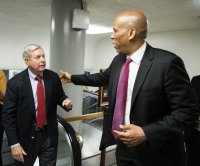