But while the prospects for an immediate breakthrough "are probably not very bright, that doesn't mean you can't make some progress, and set the groundwork for larger progress at some period of time," Daniel Shapiro told The Jerusalem Post ahead of the Washington meeting at Blair House.

The Quartet on the Middle East meeting, to be held in the morning on the sidelines of a Group of Eight foreign ministers meeting, was to include U.S. Secretary of State Hillary Clinton, Russian Foreign Minister Sergey Lavrov, European Union foreign policy chief Catherine Ashton, U.N. Secretary-General Ban Ki-moon and Quartet special envoy Tony Blair.

The Quartet wants to move the discussions "increasingly into the core issues," Shapiro told the newspaper.

Israeli Ambassador to the United Nations Ron Prosor told the Security Council Jan. 24 the primary obstacle to peace was not Israeli settlement construction in the West Bank and East Jerusalem.

The 60-year-old Palestinian claim maintains a right for Palestinian refugees and their descendants to be permitted to return to Israel.

"This would mean the destruction of Israel" because it would destroy the Jewish homeland, Prosor said.

"It is important for the Quartet to put a lot more emphasis, in addition to what it traditionally does, on [Israeli] violence in the face of non-violent Palestinian protests, settler violence [and] Israeli army incursions into Area A," Fayyad told the Post Tuesday.

Area A involved about 17 percent of the West Bank with no Israeli settlements and operating under full Palestinian civil and security control.

Israeli troops maintain no presence in Area A but sometimes conduct raids that Israel says are to arrest suspected militants.

The Palestinian Authority walked away from deadlocked exploratory peace talks with Israel Jan. 25, saying it would rejoin talks only if Israel stopped all settlement construction -- deemed illegal under international law -- in the West Bank and East Jerusalem.

It also called on Israel to accept its borders before the 1967 Six Day War that led to Israel's West Bank and Gaza occupation.

The Quartet seeks an Israeli-Palestinian peace agreement by the end of 2012. 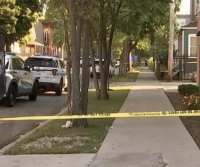 U.S. News // 4 hours ago
Record-smashing heat wave poised to send temps even higher
Death Valley, Calif., the record-holder for the highest air temperature ever recorded on Earth, 134 degrees Fahrenheit, could come fairly close to that mark later this week.
Advertisement