NEW ORLEANS, April 3 (UPI) -- A shadow that resembles the face of a bearded Jesus has drawn thousands of pilgrims in the past few days to a New Orleans chapel.

The shadow at the Ursuline Academy chapel, the National Shrine of Our Lady of Prompt Succor, is clearly thrown by a chandelier, The Times-Picayune reported. But worshipers say it is Jesus Christ wearing a crown of thorns.

Some visitors have found an image of Christ's mother, the Virgin Mary, in another shadow.

Kim Thompson of Lakeview said she finds it significant that no one noticed the shadow until just before the start of Holy Week, the week between Palm Sunday and Easter.

"It's got me believing," she said.

By Monday, about 2,000 people had visited the chapel since the shadow entered the public domain. That is far more than the usual number of visitors, forcing the Ursuline sisters to keep the chapel open for longer hours.

U.S. News // 3 hours ago
American Airlines to pay back federal debt with $7.5B from bonds, loan
March 8 (UPI) -- American Airlines announced Monday that it will pay back loans it received from the federal government by privately selling $5 billion worth of bonds borrowing $2.5 billion through its customer loyalty program. 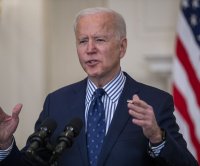 U.S. News // 5 hours ago
Stimulus payments could go out late this week if House passes Senate bill
March 8 (UPI) -- The House is expected to pass President Joe Biden's $1.9 trillion American Rescue Plan this week, which means the Internal Revenue Service will likely begin sending out a third direct stimulus payment to many Americans.

U.S. News // 5 hours ago
Trial to begin for Derek Chauvin, officer charged with killing George Floyd
March 8 (UPI) -- The trial of former Minneapolis Police officer Derek Chauvin begins on Monday, as jury selection gets underway in the case involving the killing of George Floyd almost a year ago.

U.S. News // 19 hours ago
Arkansas aims to be the next to lift mask order
March 7 (UPI) -- Arkansas Gov. Asa Hutchinson said he aims to deliver his state an "off-ramp" to COVID-19 restrictions, by removing penalties last month and lifting the mask order by March 31 if it meets certain requirements. 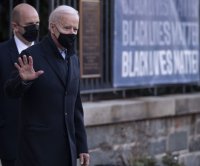