The poll found 81 percent of adults said an educational program or counseling is an appropriate consequence for teens found to have engaged in sexting.

In contrast, most adults do not favor legal consequences for minors who send sexually explicit photos to other minors -- 44 percent, support fines less than $500 for youth sexting, while 20 percent or fewer think teen sexting should be treated as a sex crime.

"As youth sexting has become more of a national concern, many states have acted to address the issue. However, before this poll, very little was known about what the public thinks about sexting legislation," Davis said in a statement. 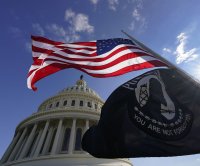