SACRAMENTO, March 22 (UPI) -- A jury awarded about $4.03 million to two girls who said they were molested by a physical education teacher at a Sacramento elementary school.

One juror said after the Sacramento Superior Court verdict was announced Wednesday that school officials dropped the ball on sexual abuse training for both students and teachers, The Sacramento Bee reported Thursday.

"They set the standards, but they didn't spend any money to have those standards met," juror Todd Wilhoyte said. "In particular, they said they were going to do age-appropriate training for kindergarten through third grade on what to do about molestation, and they completely blew it off."

Mehrdadi said he never sexually abused the girls and he has never been arrested or charged with a crime. He was listed as a defendant in the civil trial, but settled out of court before the trial.

U.S. News // 14 minutes ago
Biden unveils strategy to end HIV/AIDS epidemic in U.S. by 2030
Dec. 1 (UPI) -- To commemorate World AIDS Day on Wednesday, President Joe Biden unveiled an updated national strategy to fight the disease -- which also aims to end the epidemic in the United States by the start of the next decade. 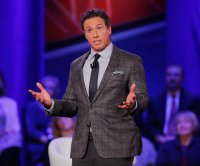