"For some reason, the [Republican Party] has chosen 2012 to re-litigate reproductive freedom, an issue that was resolved decades ago," Trudeau told The Washington Post, pointing to the landmark 1973 Roe vs. Wade decision by the U.S. Supreme Court.

"Why [GOP presidential hopeful Rick] Santorum, [right-wing talk show host Rush] Limbaugh et al. thought this would be a good time to declare war on half the electorate, I cannot say. But to ignore it would have been comedy malpractice," said Trudeau, who in 1975 became the first comic-strip artist to win a Pulitzer Prize, traditionally awarded to editorial-page cartoonists.

"Doonesbury" syndicate Universal Uclick said it offered an alternate strip from last year to newspapers wanting it. The syndicate, formerly known as Universal Press Syndicate, would not say how many newspapers requested replacements.

"Doonesbury" is syndicated to almost 1,400 newspapers worldwide and is accessible online in association with Slate magazine at doonesbury.com.

The strip this week deals with a Texas law that requires abortion providers to perform an ultrasound, showing an image of the fetus, before the procedure in an attempt to persuade pregnant women to reconsider their decision.

The strip portrays a woman who turns up at an abortion clinic in Texas and is told to take a seat in "the shaming room," the British newspaper The Guardian, which will run the strip, reported.

A state lawmaker asks if she had been to the clinic before and, when she says yes, to get contraceptives, he replies: "Do your parents know you're a slut?"

Later, she says she does not want an intrusive vaginal examination but is told by a nurse, "The male Republicans who run Texas require that all abortion seekers be examined with a 10-inch shaming wand," The Guardian said.

Transvaginal sonograms include an invasive examination with a plastic wand that often measures 10 inches in length.

The nurse adds, "By the authority invested in me by the GOP base, I thee rape."

Asked about using "rape" to describe what the wand probe, Trudeau said it fit the internationally understood definition.

"The World Health Organization defines rape as 'physically forced or otherwise coerced penetration -- even if slight -- of the vulva or anus, using a penis, other body parts or an object.' You tell me the difference," he told the Post.

Trudeau told The Guardian in an e-mail: "Ninety-nine percent of American women have or will use contraception during their lifetimes. To see these healthcare rights systematically undermined in state after state by the party of 'limited government' is appalling.

"In Texas, the sonograms are the least of it," he added. "The Legislature has also de-funded women's health clinics all over the state, leaving 300,000 women without the contraceptive services that prevent abortions in the first place. Insanity."

Texas Gov. Rick Perry, who dropped out of the GOP presidential race in January and signed the abortion measure into law last year, said through a spokeswoman, "There is nothing comic about this tasteless interpretation of legislation we have passed in Texas to ensure that women have all the facts when making a life-ending decision." 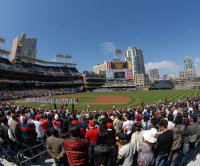