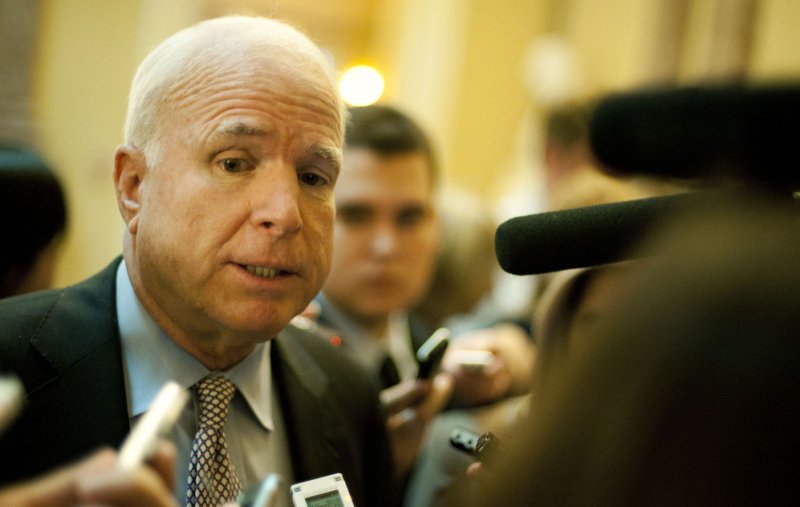 McCain said he has praised the sanctions but they "have not deterred the Iranians from the path that they're on."

"I only use force when the time and circumstances demand it. Already, there is too much loose talk of war," Obama said.

"[Suppose] that there was a country in our hemisphere that was dedicated to 'wiping us off the map,' they were developing a nuclear weapon, and at some point we didn't have the capability to remove that threat but we had to rely on another ally to do that for us. That's basically the situation that the Israelis may find themselves in."

The U.S. has been "surprised" in the past when Pakistan and North Korea acquired nuclear weapon technology, McCain said.

"So what the president is asking the prime minister of Israel to do is to rely on his judgment as to when force may be necessary," McCain said.

Israel has said it would consider a military option against Iran before the Islamic republic's nuclear facilities become immune to a unilateral airstrike.

Prime Minister Binyamin Netanyahu was expected to warn Obama during meetings Monday in Washington that Israel may take matters into its own hands unless the president pledges to use U.S. military forces to prevent the Islamic Republic from acquiring a nuclear weapon.

McCain spoke of a deteriorating relationship between Israel and the United States since Obama "insisted on a settlement freeze as a pre-condition for talks between the Israelis and the Palestinians."

U.S. News // 2 hours ago
Attempted murder suspect on the run still using dating apps
Jan. 29 (UPI) -- A Nevada man accused of attempted murder and torturing a woman in Oregon is on the run and still active on dating sites, police say.

U.S. News // 6 hours ago
6 killed, more injured in New York bus crash
Jan. 29 (UPI) -- Six people are dead and another three are injured after a box truck and a bus collided head-on in New York.

U.S. News // 6 hours ago
Jewish family sues NYC's Guggenheim Museum seeking return of Picasso painting
Jan. 29 (UPI) -- A Jewish family has filed a lawsuit against the Guggenheim Museum in New York City seeking the repatriation of an iconic painting by Pablo Picasso that they allege was sold to allow the family to escape Nazi Germany.