Specter: Santorum is 'far to the right'

"Where you have Senator Santorum's views, so far to the right, with his attitude on women in the workplace and gays and the bestiality comments and birth control, I do not think it is realistic for Rick Santorum to represent America," Specter said on MSNBC's "Daily Rundown."

Specter added, however, Santorum's endorsement of his 2004 senatorial battle against a more conservative candidate shouldn't be held against him. Mitt Romney, locked in a battle with Santorum for front-runner status, has attacked for his endorsement of Specter, who eventually abandoned the Republican Party for the Democratic Party in 2009.

"I don't think that Senator Santorum can be held responsible for what I did," Specter said. "I was often at odds with the Republican caucus."

Specter said Santorum's comments during Wednesday's debate in Arizona misrepresented the circumstances of the endorsement, Politico reported. Santorum said he endorsed Specter on the condition that Specter agree to the confirmation of President Bush's judicial nominees.

"We never had a conversation about his support for me in 2004. It was just assumed. We had always supported each other. The issue about my backing the president's nominees came up after I was elected and the question was on my [Senate Judiciary Committee] chairmanship," Specter said. "That is flatly not true."

Huntsman, Barbour call for new candidate Santorum: I voted for bills I didn't back

U.S. News // 5 hours ago
Shifting pattern to dump mountain snow, raise flood threat across the West this week
A flurry of storms are expected to march into the West Coast this week, bringing along a changeable mixture of rain, wind and snow for many places. 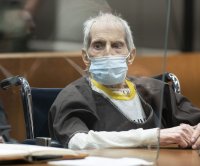 U.S. News // 23 hours ago
Robert Durst put on ventilator with COVID-19 after murder conviction
Oct. 16 (UPI) -- Robert Durst, a real estate heir who was sentenced to life in prison this week for murder, is on a ventilator after contracting COVID-19.