NEW YORK, Jan. 5 (UPI) -- A sobbing mother gave a eulogy Thursday for her three daughters, killed in a Christmas Day fire in Stamford, Conn., saying they live in her heart.

St. Thomas Episcopal Church in New York City was full for the funeral of Lily Badger, 9, and her twin sisters, Sarah and Grace, 7, The New York Times reported. The mourners included Stamford firefighters who tried in vain to rescue the girls and rescue their grandparents, Lomer and Pauline Johnson of Southbury, Conn.

Madonna Badger, 47, the girls' mother, and a friend, Michael Borcina, were the only people to get out of the house alive. Badger broke down several times as she described each of her daughters, the New York Daily News said.

Badger, a successful advertising executive, bought the $1.7 million mansion in Stamford after separating from her husband, Matthew. The couple stood side by side as the three coffins were carried into the church on the Upper East Side.

Investigators believe the fire was started when still-burning embers were raked from the fireplace and dumped where they were in contact with flammable items. 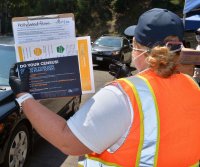 U.S. News // 30 minutes ago
14 states were overcounted or undercounted in 2020 census, survey finds
May 19 (UPI) -- The 2020 census undercounted residents in six states and overcounted those in eight others, a Census Bureau report released Thursday indicates.

U.S. News // 1 hour ago
New York court expected to decide if zoo elephant deserves human right
May 19 (UPI) -- New York's highest court is expected to rule in the case of Happy, an Asian female elephant at the Bronx Zoo, to determine if she should be free from unlawful captivity similar to humans. 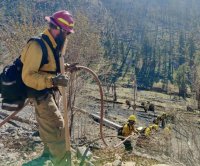 U.S. News // 3 hours ago
Grand jury indicts Buffalo, N.Y., shooting suspect
May 19 (UPI) -- A grand jury has returned an indictment for the suspect in a mass shooting at a Buffalo, N.Y., grocery that killed 10 people, prosecutors announced Thursday during a court hearing.

U.S. News // 4 hours ago
Michigan man imprisoned for 1986 murder will remain behind bars for life
May 19 (UPI) -- A Michigan man serving a life sentence for a 1986 Port Huron murder has hit another roadblock in a 30-year-fight to overturn his conviction.

U.S. News // 8 hours ago
Senate approves new $40 billion aid package for Ukraine
May 19 (UPI) -- The Senate on Thursday approved a package worth tens of billions of dollars in additional aid and equipment to Ukraine to fend off Russian advances.
Advertisement