Halloween spending up despite economy

WASHINGTON, Oct. 30 (UPI) -- Despite the struggling economy, consumers are spending more on costumes and candy for Halloween this year, the National Retail Federation said Sunday.

"People love, in an economy like this one, to just get out, let loose, have a little bit of fun," the vice president and spokesman for the organization, Ellen Davis, said in an interview on CNN's "State of the Union." "For example, in 2008, when everything was in the tank, Halloween spending rose. This year, Halloween spending is up again, and part of that is because people are just looking for an opportunity to have a little bit of fun."

Davis said unlike Christmas, Halloween is a "no-strings-attached holiday," meaning people don't have to buy gifts or travel to celebrate if they don't want to. The National Retail Federation estimates consumers will spend about $20 for costumes and candy and $15 to $16 on decorations per family.

For the most part, she said, the retail success of Halloween doesn't indicate a boost in sales come Christmastime.

"... Halloween is relatively isolated. Not only is it isolated in terms of trends because it almost is recession-proof, but it's also isolated in the types of merchandise. Halloween is really about costumes, candy and decorations; and Christmas, as we know, is so much more than that," Davis said. 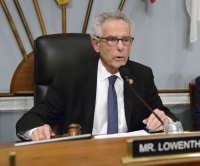