DETROIT, Oct. 19 (UPI) -- A mother has been awarded $144 million in her suit against a Michigan hospital and doctors she said left her daughter needing life-long care.

Kimberly VanSlembrouck of Macomb Township said the jury verdict Tuesday against Beaumont Hospital in Royal Oak would ensure her brain-injured daughter gets the care she needs for life, The Detroit News reported.

"It's not about getting rich," she said. "It's helping a poor baby who didn't ask for this."

A civil jury found the hospital negligent in the birth of Markell VanSlembrouck, now 15.

The lawsuit charged Beaumont and delivering doctor Andrew Jay Halperin were negligent in failing to perform a Caesarean section, instead forcing the 10-pound, 12-ounce Markell through the birth canal, causing her to suffer a fractured clavicle, hemorrhaging and severe brain trauma.

In a statement Beaumont Health System said the hospital disagrees with the verdict and plans to appeal.

"We believe we scientifically proved that the child's disabilities are related to a genetic condition," hospital spokesman Bob Ortlieb said.

U.S. News // 2 hours ago
Black Friday crowds sparse as shoppers adapt to pandemic
Nov. 27 (UPI) -- The massive shopping crowds that have traditionally followed the day after Thanksgiving were missing Friday as businesses across the country made changes to adapt to the coronavirus pandemic.

U.S. News // 18 hours ago
TSA screens 5 million passengers in week before Thanksgiving
Nov. 26 (UPI) -- More than 5 million travelers were screened by the U.S. Transportation Security Administration between Friday and Wednesday amid the Thanksgiving holiday. 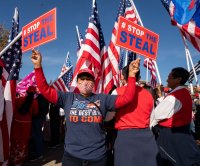 U.S. News // 22 hours ago
Donor sues pro-Trump group to recoup $2.5M in failed election lawsuits
Nov. 26 (UPI) -- A North Carolina businessman and Republican donor filed suit in federal court saying he was duped by a Texas group that claimed they would file lawsuits to uncover election fraud on behalf of President Donald Trump.