Felix Rivera-Pitre -- seen in video recorded Friday being grabbed from behind, swung round and punched in the face by a white-shirted officer identified as Deputy Inspector Johnny Cardona -- told the Gothamist Web site he "shot the cop a look" but did nothing to provoke the officer.

"The cop just lunged at me full throttle and hit me on the left side of my face," he said.

Police had no immediate comment. But senior police spokesman Paul Browne said after the incident Friday Rivera-Pitre was wanted for questioning for allegedly trying to elbow a police officer in the face.

Kuby said he demanded Vance investigate after an analysis of an Oct. 1 video showed a white-shirted officer whose badge bore the name Cardona grabbing a woman from behind an orange fence used for containing, or "kettling," protesters, pulling her to the ground and dragging her underneath the fence to arrest her.

Soon afterward, Deputy Inspector Anthony Bologna walked up to the remaining women in the kettle and pepper-sprayed them in the face, the video indicated.

That video became one of the most notorious images alleging inappropriate Occupy Wall Street policing.

The protesters -- whose occupation of Wall Street entered its second month Monday -- have amassed more than $230,000 and a warehouse full of supplies for their campaign, the Occupy Wall Street Web site indicated early Monday.

The money has come from online donations, money orders and about $1,000 a day dropped in a plastic jug and paint buckets in Zuccotti Park, between Wall Street and the World Trade Center site.

The protests -- which have spread to scores of cities across the United States and inspired rallies on every continent -- also received acknowledgment of their legitimacy Sunday from House Majority Leader Eric Cantor, R-Va., who a week earlier compared the movement to "angry mobs."

"More important than my use of the word ["mobs"] is the fact that there is a growing frustration out there across this country, and it's warranted. Too many people are out of work," Cantor told "Fox News Sunday."

But he held Democrats responsible for blaming "others rather than focus on the policies that have brought about the current situation."

Obama, speaking at a dedication of a new Washington memorial to 1960s civil rights activist Martin Luther King Jr., said King "would remind us that the unemployed worker can rightly challenge the excesses of Wall Street without demonizing all who work there."

Obama said Oct. 6 the protests expressed "the frustration of the American people" with the financial sector. 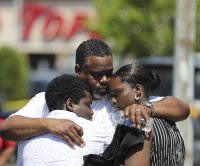 U.S. News // 2 hours ago
House Dems pass bill to target domestic terrorism in wake of Buffalo shooting
May 19 (UPI) -- Democratic lawmakers in the U.S. House of Representatives have passed legislation to combat domestic terrorism by creating offices throughout the country to target such threats.

U.S. News // 3 hours ago
U.S. charges Queens author with spying on dissidents for China
May 18 (UPI) -- United States has charged a Chinese American academic and author who helped start a pro-democracy organization in the United States of spying for years on Chinese immigrants and dissident communities for Beijing.

U.S. News // 7 hours ago
Sister says at trial she witnessed Johnny Depp strike Amber Heard
May 18 (UPI) -- Amber Heard's sister, Whitney Heard Henriquez, testified that she witnessed her sister's ex-husband, Johnny Depp, strike her and that she acted as a "marriage counselor" for the couple.

U.S. News // 7 hours ago
Massachusetts man diagnosed with 1st U.S. case of monkeypox in 2022
May 18 (UPI) -- Officials in Massachusetts on Tuesday confirmed a U.S. case of the monkeypox virus as concerns over the rare disease grow with multiple countries announcing infections.

U.S. News // 12 hours ago
Surge of heat to bring hottest weather since last summer to Northeast
High temperatures ranging from the upper 80s to the mid-90s are on the way for close to 100 million people in the Northeast this weekend.
Advertisement