The Republican former Massachusetts governor, in a speech Thursday at Microsoft headquarters near Seattle, said he would take a tough stance as president against foreign importers who steal U.S. designs and technology, The Washington Post reported.

"If you cheat, there's a huge advantage," Romney said. "Fortunately in most of our lives, we find a way to stop the cheaters ... we haven't done that with regards to trade. China, in particular, has realized the extraordinary advantage to cheating."

Romney, who accused President Barack Obama of standing in the way of free trade, said he would impose punitive tariffs on some Chinese products and work with other countries to set intellectual property sanctions against China and prevent the transfer of some technologies, the newspaper said.

The Democratic National Committee disputed Romney's assertions about the Obama administration's intellectual property enforcement, saying the president has "made clear that he will enforce America's trade laws and stand with American workers."

U.S. News // 1 hour ago
Officials say California wildfire caused by burn pile; blaze 50% contained
Jan. 26 (UPI) -- A wildfire that's so far torched more than 700 acres and forced hundreds of residents to evacuate along California's central coast was caused by hot embers that were left over from a burn pile, officials said. 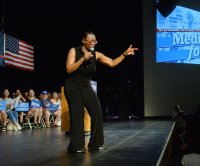 U.S. News // 3 hours ago
NFL earned record $1.8B from sponsorship deals in 2021-22 season, report says
Jan. 26 (UPI) -- Gambling contributed a big chunk of sponsorship revenue the National Football League received over the 2021-22 season, which was close to $2 billion.

U.S. News // 8 hours ago
Prosecutors charge teen in overdose death of 12-year-old girl
Jan. 26 (UPI) -- California prosecutors said they have charged a teenager with murder for selling a fentanyl-laced pill to a 12-year-old girl who died from an overdose.
Advertisement