Five organized crime organizations in Queens with ties to Europe, Asia, Africa and the Middle East were broken up after a credit card counterfeit operation netted more than $13 million over 16 months, WABC-TV, New York, reported.

The suspects are charged in 10 separate indictments with stealing credit card information from thousands of consumers in Europe and the United States.

Two dozen of the defendants also are charged with burglaries and robberies throughout Queens; 85 suspects are in custody, while 25 others are being sought by law enforcement, the television station said.

"This is by far the largest -- and certainly among the most sophisticated -- identity theft/credit card fraud cases that law enforcement has come across," Queens District Attorney Richard Brown said. "Many of the defendants charged today are accused of going on nationwide shopping sprees, staying at five-star hotels, renting luxury automobiles and private jets, and purchasing tens of thousands of dollars worth of high-end electronics and expensive handbags and jewelry with forged credit cards that contained the account information of unsuspecting consumers."

The suspects allegedly colluded with store owners and employees to finalize the most exorbitant transactions. 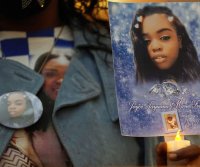 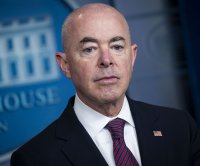 U.S. News // 8 hours ago
Biden administration proposes rule to codify DACA
Sept. 27 (UPI) -- The Biden administration on Monday proposed a new rule that would strengthen the Deferred Action for Childhood Arrivals program two months after a judge in Texas ruled the migrant program is illegal.
Advertisement