People place flowers and a Fortune Magazine cover in front of Apple headquarters in Cupertino, California on October 5, 2011, after it was announced that Steve Jobs had died at the age of 56. Jobs was the founder and former CEO of Apple that transformed personal computer technology and invented devices such as the iPod, iPhone and iPad. UPI/Mohammad Kheirkhah | License Photo

Notes from mourners cover the front of an Apple store in San Francisco as crowds gather after learning about the death of Apple founder Steve Jobs on October 5, 2011. UPI/Terry Schmitt | License Photo

A man uses his iPhone to photograph notes from mourners that cover the front of an Apple store in San Francisco as crowds gather after learning about the death of Apple founder Steve Jobs on October 5, 2011. UPI/Terry Schmitt | License Photo

In many cases the condolences and quotes were sent from the iPads, iPhones and Mac computers invented by Jobs, who had become a cultural icon over the past two decades in his signature black turtleneck sweaters and faded blue jeans.

Jobs died Wednesday at the age of 56 after years of health issues, including a rare form of pancreatic cancer and a liver transplant. He co-founded Apple in 1976 in a Silicon Valley garage and helped develop it into one of the world's leading tech companies.

Flags were flying at half-staff Thursday at Apple Inc. headquarters in Cupertino, Calif., and fans left makeshift memorials at Apple stores across the country, CNN reported.

"Apple has lost a visionary and creative genius, and the world has lost an amazing human being," Apple said in a statement on its Web site.

Facebook messages were filled with quotes attributed to Jobs, links to early commercials for Apple, like the "think different" campaign, and anecdotes about the way Jobs and Apple have impacted their lives.

"The world has lost a visionary. And there may be no greater tribute to Steve's success than the fact that much of the world learned of his passing on a device he invented," President Barack Obama said in a statement issued by the White House. "He transformed our lives, redefined entire industries, and achieved one of the rarest feats in human history: he changed the way each of us sees the world." 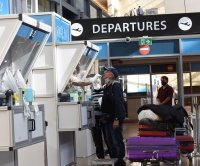