AUSTIN, Texas, Sept. 28 (UPI) -- A University of Texas fraternity in Austin engaged in hazing and hired exotic dancers to recruit new members, a lawsuit filed in a state court alleged.

The national administrative office of the Kappa Alpha Order filed the lawsuit last week against its former local chapter, which left the national organization after it was suspended in June and is known as Texas Omicron, the Austin American-Statesman reported Tuesday.

A spokesman for the local chapter and its alumni said adult entertainers were hired, but said the national office proffered no evidence to back the hazing allegations. The spokesman, local lawyer and alumnus Robby Alden, said alumni members have cautioned students against sponsoring adult entertainment and the students said they wouldn't sponsor similar shows again.

The lawsuit indicated the national KA office issued a one-year suspension to the local branch June 29 after an investigation uncovered violations of the fraternity's laws and policies, the (Austin, Tex.) American-Statesman said.

"Despite prior efforts to rehabilitate and reform the culture of this chapter … the chapter continued to engage in hazing as well as these other serious risk management violations," the national organization said in a release.

In its lawsuit, the national Kappa Alpha Order demanded Texas Omicron surrender revenue, dues and accounts collected before July 22, as well as furnishings, artwork and equipment in the fraternity house. The suit said the property, which the headquarters estimated was worth more than $200,000, should be kept in trust for use by a future local KA chapter.

U.S. News // 24 minutes ago
Congress returns to full plate of high-profile issues
Nov. 29 (UPI) -- From the debt ceiling to President Joe Biden's $1.7 trillion "Build Back Better" budget, Congress is set to spend the final month of 2021 on the high wire as members deal with numerous pressure-packed issues. 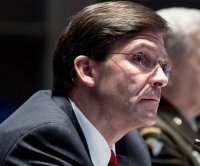